0 i spend the whole day performing to my own face

i'm sure this does something to a person, but i don't know what.

today, i cancelled class, because it's midterms and there's a pandemic and the students are protesting and we already had a "recovery week" scheduled anyway so i didn't feel so deeply that they would feel they were throwing their money to the wind.

i went to the portrait gallery.

because i love portraiture but, more precisely, because i wanted to see faces. i wanted to be surrounded by faces.

already, in my home, i am surrounded by faces, but i needed new faces, to make up for the deprivation of faces i've been enduring.

it's been cloudy and gray all week. today was blue and beautiful and borderline summerish.

burvil is in the hospital.

she went in yesterday.

a single sentence that tells you nothing of how she sat alone from 10 am to 7 pm in the hallway of the ER waiting to be admitted.

we're all laughing and lighthearted and cracking jokes about how she's going to outlive us all (something that, truly, does not seem unlikely at this point).

debo told me some weeks ago, when we were having a more serious conversation about this, that she believes burvil stayed on the farm in order to die.

burvil thought god would have mercy and take her there.

well, mercy was not had.

i continue to fight to reconcile the pieces. the woman who yelled at us, who held a house of three other adults captive for two weeks, held us in some sort of psychological vice so that we stopped breathing at the sound of her walker on the wood floor.

the woman who yelled at me, in my grandfather's van, in that awful november 2017. the woman who made me cry and did not care and demanded i back a vehicle out of the garage.

there was maybe always a streak of anger? it maybe always frightened me? the way she'd grip my wrist instead of hold my hand. it was, she said, because i'd wriggle out and get away. it was out of loved.

she loved me deeply. that i believe and know.

what i cannot reconcile is the fact that, though she loved me deeply, she hurt me deeply too.

there was this summer, right after i just started menstruating. i was so embarrassed. i didn't know how to pack or plan. i didn't have anything i needed.

my period showed up when i was staying with her and joe for a few weeks that summer. ashamed, i improvised makeshift pads out of toilet paper and masking tape. because i didn't not feel i could ask her for help. maybe? or because i did not want her to know i was growing up?

we were already lying about santa claus because, after sarah odom relieved me of my illusions, my mother assured me that we needed to continue to pretend because "burvil and joe still believe."

i was, during this time, profoundly uncomfortable in my body. i stopped hugging my family because i did not want to be made aware of my own breasts.

(a period of time that surfaces in the acknowledgement out loud, whenever friends and i hug full on, that we were "breast-to-breast.")

i've so many sensory memories of my grandmother.

she's not dead yet. i'm not meaning to write like she is.

but she's also not here with us in the way she once was.

i think she knew who i was when i last saw her. at the very least, she knew i mattered. it took a few minutes, but eventually she did smile.

when i would stay with her and joe in the house on inverness, she'd come lie in the bed next to me while i fell asleep. not touching. but in the bed on the other side. and the lamp on that side would be on and she'd lay there reading a book until i'd fall asleep.

and sometimes i'd close my eyes and jolt back awake, afraid she'd left me, and i'd turn to look, but the light was still on and she was still there next to me, reading.

i've had these nights where i have dreams and i wake up convinced she is gone.

and it feels like she is, in fact, going, albeit slowly. like she's already half slipped away, as she used to do in the night, so i'd wake up in the sunshine and roll over expecting to find her, only to find that after however long, she'd left me to sleep. 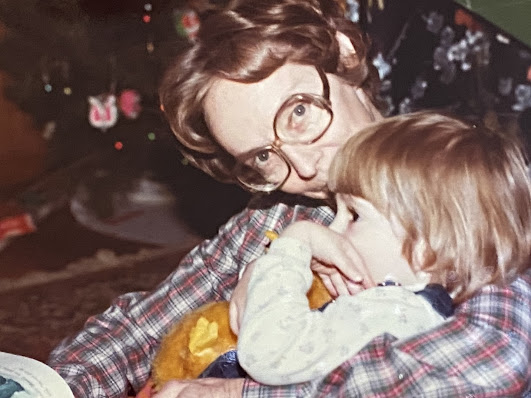 Email ThisBlogThis!Share to TwitterShare to FacebookShare to Pinterest
filed under: burvil