today, i got in a fight with my parents because they took their masks off in church. which surfaced the deeper truth that i do not trust church to keep anyone safe.

i called a family meeting. they came. we talked emotional dynamics and came up with two new phrases for the familect.

fire in the hole!

yesterday, it was four months since a man raped me.

these events are maybe not unrelated.

do i feel shame? i don't think so. i think i recognize it for the coping mechanism that it is and i am ok with how i am coping.

this afternoon, as a very round-about way of getting to the grocery store, i walked down to lafayette square. a guy i went on date with in march had texted that they've opened up the park. 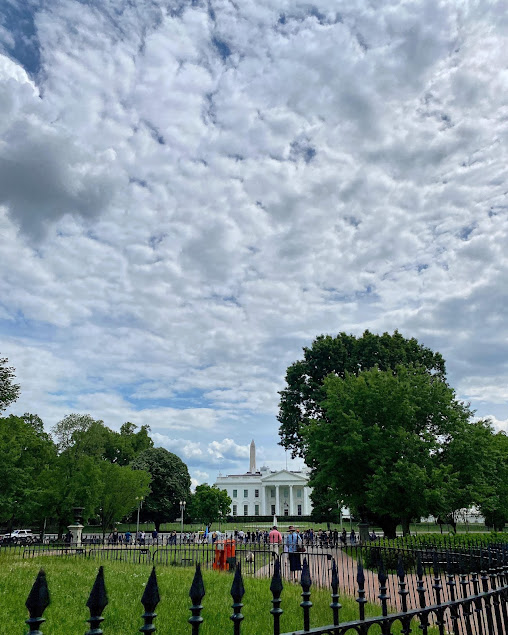 the fence is still up so it could be closed at any moment. but look at that green green lawn, those gorgeous clouds, that blue sky and that white house. can you tell? is it obvious that i teach descriptive writing?
garebear tells me that debo has reminded him that i am traumatized in other ways, which they are not. that, in being here, during the protests and during the insurrection, i've maybe got some view on the world that they do not share.
pretty sure they're not wrong. pretty sure there is not time enough in the world for us to cover that in therapy too.
on 29 may 2020, i turned 39.
on 30 may 2020, i got claude. (well, really, claude deigned to live with me, let's be real.)
on 1 june 2021, i watched live on CNN as the military and the police gassed people 0.8 miles away from my home. i watched live as the president walked across the street and held a bible upside down. i lay in bed as, all through the night, a helicopter hovered one story above L street, 7 blocks away, so loud it was as though it were in our alley. as i lay there, the police entrapped and held 200 people captive 3 blocks north.
six months later, i watched live on CNN again as, 2 1/2 miles away from my home, hundreds of people who had been terrorizing DC for the previous three months, organized and attempted to overthrow the government. the silence then was stunning.
there were no helicopters. there was no shouting. there were no shots. there were surprisingly few sirens even.
there were more sirens in the twenty minutes immediately after the verdict in the derek chauvin trial than there were on the day of the insurrection.
hell, there were more sirens during a phone call i had today than there were on the day of the insurrection.
i do not want to be raped, i do not want to be touched, i do not want people to put anything in my mouth, i do not want to leave my home but i want to see my parents.
there's that passage from the john berger book that i always quoted in relation to immigration:

i'm wondering more and more though, what if it wasn't just the one box, but a box within a box within a box within a small sound-proof room. how do you even begin to bust yourself out of that?
the massage therapist says i'm doing so much better. the knots are so much better. still, my left arm hurts. still i have dreams. still i am texting this man. still i see people on the street and i think they are him. still, i tell myself, it is recent and so it is ok, i am not ok but i will be.
i thought i left him at the old place. this is the thing about the texting. i wanted a clean break. i wanted to leave him there, in the place where he did that. but turns out life doesn't work that way. we bring this bullshit with us when we move.
but the sun is out and the cicadas are coming and i am going to memphis and claude is producing solid poos and all will be well, all will be well, all matter of things will, ultimately, be well.

Email ThisBlogThis!Share to TwitterShare to FacebookShare to Pinterest
filed under: OE in DC, rape in the city, therapy in the city