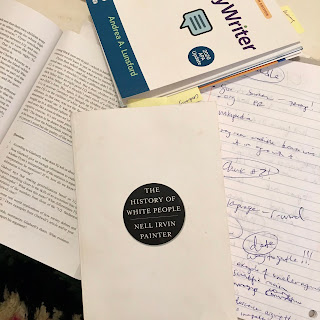 some years ago i dated someone who, i see now, was quite heavily emotionally invested in scientific racism.

it was maybe hard to see that then because he was british and affected a stereotypically british unemotional affect. so these were dispassionate arguments on his side, as he repeatedly played the devil's advocate in our discussions of the sciences versus the humanities. he could unemotionally argue, purely for argument's sake, the ideas of charles murray. i passionately disagreed and felt, tbh, my arguments were less valid by virtue of that passion.

at the time, these conversations often annoyed me, even as i felt they, just as often, helped clarify and strengthen my own thinking.

they annoyed me because i don't think the devil needs advocates. and because i do not like to argue for argument's sake.

i've come back to these conversations quite a lot, over the last few years, in teaching first year college students how to produce arguments. because i want them to argue for things they believe in. and i want them to start their argument from a place wherein their own humanity is pre-established and accepted and unquestioned.

i've also come to see more clearly the devil needs no advocates, and those playing at doing his work are truly not worth our time.

in my classroom, at least, we do not waste our time making arguments about our right to exist. because it is a fact that we already do.

anyway, i think about those conversations with that man in relation to these things sometimes but i only appreciated their maybe more long-term value today... a morning i woke up to discover that i'd assigned malcolm gladwell's rather insidious 2007 new yorker article on IQ fundamentalism in conjunction with a reading on credibility of sources.

turns out: I AM A GENIUS.

also, full disclosure: i'd not read gladwell's article in advance so, in making this pairing, i did not fully know its insidiousness and how completely it would embody the problems of credibility i wanted to raise in class. so my genius, it is largely accidental.

have i reached a stage where i, unconsciously, know what i am doing better than i realize or am i just very very lucky in the way that a class on objectivity was followed by a reading of a piece that, due to its objectivity, seems to far too warmly embrace scientific racism?

i think it's luck. very overly educated and widely read luck, but luck all the same.

still, thanks to those conversations with that man, thanks to all those arguments i made against scientific racism in 2018, lo here we are today: the copy of the history of white people pulled off the shelf; a brief introduction to charles a. murray, white nationalist, at the ready; and a discussion of gladwell's use of abelist language set to go.

none of this is purely theoretical. none of it is abstract.