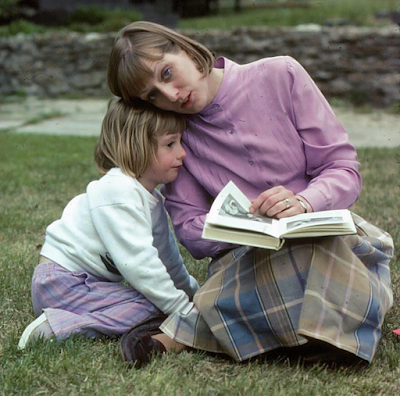 they took garebear to a tiny room.

and he tells me later that, when they did this, he assumed she had died.

together, today, we occupied a moment in which debo had died.

but, plot twist: SHE IS TOTALLY FINE. she is totally ok. she is giving orders, like the dreadful patient that she always is. the patient who says wouldn't it be nice if we could all have some tea, like she's trés trés inclusive when really she just wants some tea herself.

he looks away when he tells me about this, he does not make eye contact across facetime and the 868/949 miles between us (depending on whether you take I-81 to I-40 or I-40 all of the way...  i am very democratic today... in five classes, i let them pick their own homework).

and i am left to sit with this.

the reality that there was a period of time today in which my father was convinced my mother had died.

i do not think they really think about this.

i think they just use me to unload and, in the unburdening, they erase it.

i could well be wrong. this moment, it very well could haunt garebear until he dies.

there is a part of me that wants to take this away from them, in order to spare them this.

this is a blow i want to take.

this is a blow i want to keep from them, like a secret.

this is a blow i do not want to have to watch them endure for one another.

i am sitting in the dark. because i've done five shows. and i love them all. all of the kids. i do this and it's tiring but, at the end of it, there's this feeling that i feel with absolutely nothing else in my life, and, when it's all over, i think yes, that was good, what we're doing here matters, in a way that nothing else does.

i'm sitting in the dark because i've stared at a screen for eight hours straight.

and even as he begins to say it, without him having said it, i know what he's going to say.

somehow, i know this was a day that, at some point, my father thought my mother had died.

the highlights of my day are that (1) my mother did not die, and (2) i exposed two classes of young people at an HBCU to the fact that muhammad ali was a poet.

bizarrely, i would contend that these were equally exciting events.

i feel horribly guilty that these were equally exciting events .

had debo died today, i know i would've drawn a tremendous amount of comfort from the student-- a budding poet-- whose face reshaped itself into an expression of complete joy when i revealed that muhammad ali was not just a boxer and a fighter but also someone who wrote verse to psych out his opponents.

the composition of his face, it will stick with me.

the composition of debo's nose, it is in flux.

but we are all alive. we made it through this day. we are all here. some of us taking orders, some of us giving them, some of us far, far away, 8-21 months away, in the capitol of a nation that seems to be falling apart.

Email ThisBlogThis!Share to TwitterShare to FacebookShare to Pinterest
filed under: debo, so this is 2020, the family forward