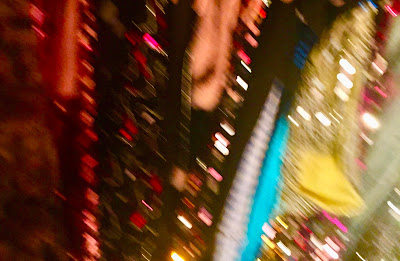 it was very overcast. the clouds hung very low.

i think it was probably a thursday. one of the thursdays where i did three shows and then i took my #adjunctfashion and my sore knee home and i collapsed, ate a giant bowl of pasta and watched vanderpump rules for three hours to decompress before falling into bed.

the thing i remember is experiencing such a sense of relief, as i walked up the hill out of campus, past the national basicalla, past the nuns and the priests, towards the metro, for what may have been the last time.

i remember so little.

but i do remember the relief. though i do not specifically remember why, on that particular day. beyond maybe the fact that i felt like they were finally all on board, or at least a plurality. we'd reached the tipping point in the semester where, by the sheer force of my personality, i had won them over.

or it maybe wasn’t even that much.

it was maybe only that i made a joke in my last class and i saw more than three people laugh.

but i was leaving the building, and the sky was very grey and the clouds hung very low and i passed one student and she said hello and wished me a happy weekend, and i saw…

one day where i saw a particular student slowly walking up the hill and i passed her and wished her a happy weekend and another day where i stayed later (was this the last day? what is wrong with me that i can not remember the end?) to talk to another student about her current situation and then later i saw that same student, from the other day, in the distance, putting her stuff in her car.

and i remember thinking, for whatever reason, this matters. what we're doing here, it really matters.

it's terribly important, our being together, in the classroom, on tuesdays and thursdays, face to face.

there were a lot of overcast days, it seems, in retrospect.

that may or may not be accurate.

but i remember her. i’ve conflated the days but she is in both of them and it’s such a vivid memory.

i think about her often in the daylight, that student, this memory, as the sun filters through my sequins.

i dream i have a sore throat but i’ve not dreamed about her.

i dream i go out and about without a mask and i do not know why but i spend all of my dreams explaining that i know better, that i have a mask that debo made for me and i wear it always now in real life though i do not know why it is not with me now, in my dreams.

it matters, what we're doing here.

i dream these dreams and i wake up alone inhaling, deeply, and then i get coffee and i read for a bit and, later, i fall back asleep and then i awake and i gather myself and i try to teach my AU kids something about celebrity that gives them permission to have feelings about what they're experiencing right now, i try to give them permission to be human, and i read the rants from my trinity girls and i record a "word of the day" video for them in which i try to use vocabulary in a way that will help them process whatever the fuck it is that is going on with them.

i’ve dreamed i was teaching a class in person and awoke feeling tremendously pleased, but i do not remember there actually being students in the room.

i was in a room, but none of my students were there. all of these people, whose attention i have for one more week. i dreamed about our class but they were already gone. already they had left me.

this happens every semester. there's a tremendous amount of grief involved in letting go of all of the people in that room.

i do not remember this from when i was a student. i have come to expect it every semester as a teacher.

it has been like nothing else this semester, because i already did it once. already dealt with the fact that we will never be as we were when we were last together.

we will never be together in that room again.

we will never be in that room again.

they will, most likely, never be in my life again.

i may never see them again.

in therapy, it was repeatedly reenforced that i am terrible at endings.

i’ve so many memories of the last classes i have taught. they feel like life and death.

this semester though, it has never before felt so much like life and death.

i know i only teach composition, rhetoric, but people, words are life and death.

i've had versions of this before. students who were gay and homeless, students who experienced loss, students who lost their home and their housing and were raising their kids out of their cars and who i met at starbucks to administer an exam so they could just make it through the class.

it was hard enough as it was.

i know about their home lives, their boyfriends and their siblings and parents, i know that the power has been out in their homes for three weeks, i know they are queer and that they do not feel accepted by their mothers, that they can’t focus, can’t sleep, can’t eat, eat too much, feel guilty, feel lazy, feel so so so so so so sad though they do not know why. i know that they want to go outside, that they went to the grocery, went to the fish market before the mayor shut it down, can’t write their essays, are sick of being in the dorms, can’t handle the loneliness, want to write a book, are doing yoga, are working out for three hours every morning, can’t get over a sinus infection, lost a grandparent, have a grandmother in the hospital, can’t go to the funerals of the five people they know who died last week.

i know all of this and, twice a week, i put on a face full of make-up and some sequin outfit that i dedicate to someone on instagram and i make a fucking vocabulary building video that i post to youtube.

and there’s a semester to be ended still.

there is a whole week to be got through.

and i do not see an end to this.

honestly, i do not see how we ever recover from them having lost this much.

Email ThisBlogThis!Share to TwitterShare to FacebookShare to Pinterest
filed under: so this is 2020, teaching in the city