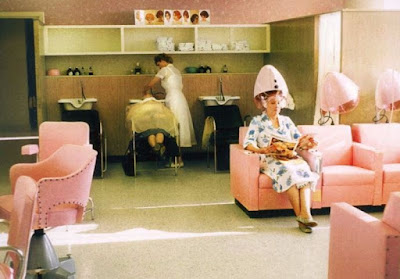 i'm at the hair cuttery when i hear her say hello, and the beautician says, heyyyy, d____, and i know it's who i think it is.

she's here because it rained earlier in the week and she needs to get her curls redone because the TV people screwed them up.

i am at a discount hair cut chain getting my hair cut two chairs over from d_____.

she tells us about her curls and what the combination of the rain and the TV people did to them. we talk hairsprays. i say the words "aqua net" and everyone laughs in glee because they've not thought of aqua net in years, decades even. they wonder if it still exists. i inform them, sagely, yes, it does. and it is as reliable as ever.

i'm getting my hair professionally cut for the first time in a year and a half as a treat in the midst of grading undergrad essays. i did not expect to be an accidental spokesperson for aquanet in front of someone i've seen so regularly on TV.

her skin GLOWS. like, RADIANTLY. presumably partly from the make-up but also from having really fucking good skin.

her lashes were false but very well fitted. she says she didn't wear them until after 2016, because 2016 was so bad and now she's on the channel, they have to wear them. the channel demands it.

the stylist confesses to me that she has never tried fake lashes in her life but admires them on others.

i confide back that i have tried them but always fail to correctly situate them on my lash line so, instead of having amazing lashes, it looks like i have two eyelids.

d_______ engages the woman two chairs over on the other side in a discussion of allergies. "the revenge of the swamp" she calls them, as she tells us a story about the congestion she experienced after chasing down trash in her yard the night before because her neighbor didn't properly adhere their garbage bin lid.

the woman two chairs over on the other side suggests an allergist. she tells us the details of her visit to the allergist. how they prick you with all those allergens. how they pricked her and she blew up and was allergic to everything from cockroaches to cats to dill.

COCKROACHES! we all say in unison. d______ launches in to a story about growing up in the south, how the cockroaches were always around and how she and her brothers and sisters would name them and say, oh, there comes george now, in for the night.

but, really, hell of a way to start a friday.
by oline

Email ThisBlogThis!Share to TwitterShare to FacebookShare to Pinterest
filed under: celebrity in the city