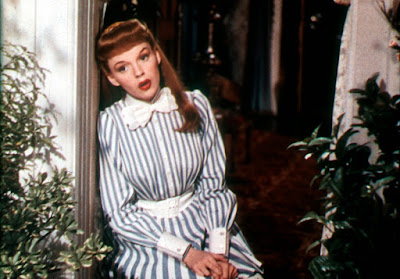 it's a bazillion degrees, no lie. i'm wearing the dress i bought because it looks like a modernized, strappy version of esther smith's tennis costume in meet me in st. louis.

as an eight year old little girl i wanted nothing more in the world than to be esther smith arriving home after a game of tennis and singing about the boy next door while she waited to wash her hair. (except maybe to be vivien leigh...)

i'm a thirty-five year old woman on the hottest day of the year, sitting in a library with no air con and wearing a strappy version of esther smith's tennis costume when N sits down next to me and, her eyes widening, exclaims in a non-library voice, MEET ME IN ST. LOUIS!!

Email ThisBlogThis!Share to TwitterShare to FacebookShare to Pinterest
filed under: summer in the UK