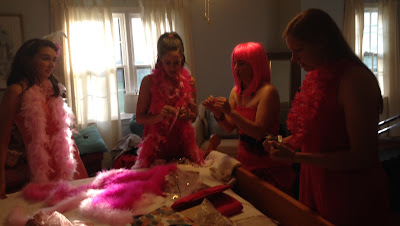 there was a moment in the midst of preparing for the pink party where i became acutely aware of the fact that my friend were doing- with great relish and in public- what my younger self had done many many times, embarrassed, behind closed doors.

i have somehow, as an adult, orchestrated things so that behavior my younger self felt was strange or off is publicly celebrated and thoroughly enjoyed.

the realization of how completely this has happened was the best thing ever.
by oline

Email ThisBlogThis!Share to TwitterShare to FacebookShare to Pinterest
filed under: friends in the city, o young oline