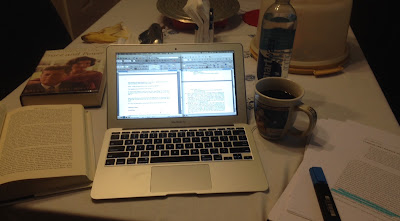 it's been awhile since i've started something from scratch. i'd forgotten how ugly it is.

several nights ago, asleep in mississippi, i dreamed i was at a conference where a girl delivered a paper that was word for word everything i had written that morning delineating the differences between popular biography from super-pop. i awoke stricken with the sense that even cobbling together other people's thoughts in new ways- never mind original thought of my own- would be difficult if whole conference papers have already been written with words i'd written less than 24 hours before.

the next night, i dreamed one of the examiners saw a book i was referencing, picked it up and shook his head ruefully, as though he cannot believe anyone could possibly be this stupid, and said, miss eaton, you must work with what you have.

thus my fear that i have built a mansion on the sand haunts both the day and night.

garebear is convinced i can do this. he wasn't always. when, for the third time in a single week, i completely overhauled the plan for what i'm doing and called debo to say- for the third phone call in a row- i think i've got an idea, she let slip that, though she never doubted, garebear's faith had been shaken.

steeled by my conviction that i'm secretly a genius and of a temperament that requires a state of total impossibility to get anything done, i am resigned. but garebear was worried, though he is no longer.

garebear's new-found calm seems to have less to do with my ideas than with a dream he had several weeks ago wherein he kept running into women who seemed to recognize him. and that, finally, when he was at a restaurant, one of them came over to his table and said, i recognize you from your daughter's work for biographers international.

he called me, gleeful, in the morning. as though this were a prophecy. i'd think the endgame is to have a book published rather than to have my father recognized for my volunteer labor, but i'll take it.

when he told me this, i was reminded of how tori amos' parents are recognizable to her hardcore fans and it seemed rather lovely for my father to take his place next to edison and mary ellen in the pantheon of parents of people who have done things.

on my birthday eve, i dreamed debo and i were at the quickie-mart. every magazine on the news stand was about jackie. this seemed to auger well.

when debo returned to mississippi, as we journeyed up to the gas station that sells the good chicken, i told her about the idea i've settled upon and am working with- the idea currently stretched across a seven-page outline and twenty-two of the most disjointed pages i've written in a long, long while.

and as i was telling her it dawned on me that this idea is something i wrote about for a supervision in the spring of 2013. the thing i'm writing now is a version of what i was writing, if not well, three months into my phd.

this is either galvanizing or demoralizing and/or just laughably typical of the circularity of writing and thinking.

and a reminder that i should be better at this by now. i should've realized that when i thought, in 2013, oh, i don't want to write about that, that would, one day, be the very thing i was writing about.

that is always the way. it seems i should know that by now and yet it is one of the central surprises of writing.

it is also perhaps the central allure of writing- its ability to surprise again and again, in spite of being something at which i am ostensibly talented and, therefore, one would imagine, i know how to do.

there is both a sense of pressure (i should be better at this) and relief (actually, no, this is the way this works), which is equal parts terrorizing and freeing.

this is not so far off from that eaton family favorite saying from our mary englebreit iron-on decal days: wherever you go, there you are. a truth so simple i continue to wonder what compelled us to emblazon it on half a dozen pastel sweatshirts. and yet a truth whose truthiness i return to again and again.

for my birthday, debo gave me a bracelet engraved with a message: she believed she could, and so she did. and i thought, dear lord, it has come to this. we've reached the point in my academic ordeal where inspirational jewelry is required. then i put it on.

we've reached the point in my academic ordeal where i'll take any support i can get.

the other day, while he was still in memphis, i emailed garebear- who, simply by virtue of him being the parent who saw to my early requests whilst my mother ignored them, is my archivist. i asked him to bring two books down to mississippi so i could write about what i wanted to write about on monday morning. the email received no response.

he arrived in mississippi complaining of how he had to go digging in the attic and how hot it was up there. he also brought the two books.

that morning, i wrote about what i wanted to write about.

it's a phrase i keep telling myself every time i put down a sentence i know, once i've have my footing in whatever it is i'm doing here, will eventually be cut.

this is the way this works. all will be well. however uncomfortable or tedious, this is exactly as it should be.
by oline

Email ThisBlogThis!Share to TwitterShare to FacebookShare to Pinterest
filed under: oline in america, the corrections