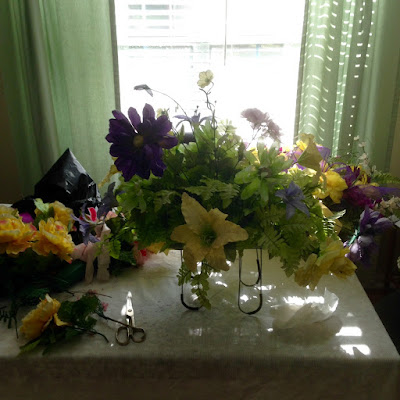 last spring- when i was deep into my OMG, i just wrote about an entire life in less than two years... life is going to pass soooooooooo quickly and we're all going to die phase- i began matter-of-factly throwing out, in casual conversation, the phrase "well, we're all going to die". mostly with N- the person with whom i spent the most time and with whom i most frequently had conversations wherein this fact might need to be pointed out.

as this is kind of not a conversational topic traditionally introduced over lunch, the horror with which she first greeted this declaration remains a vivid memory.

but, in the intervening year, it's a statement i've evidently repeated to such an extent that it has become normalized. to such a point that, when zoolander 2 was preceded by an advert that included mention of mortality, N leaned over and said, with glee, they sound just like you!

a comparison about which i have mixed emotions because do you really want to be the friend known for constantly reminding everyone they are mortal?

(though, this could mean that, when i die, they will put on my tombstone: she was right.)

i bring this up now because i am in mississippi and just wrote an email to N.

an email wherein i mentioned:

* last night, burvil and i made floral arrangements for our relatives' graves.

* today, i am driving burvil to the cemeteries to refresh everyone's flowers.

* tonight, debo and gary are going to a funeral in memphis.

* on sunday, for my birthday, we will be eating the fried chicken from the gas station, a bucket of which someone brought to joe's funeral and with which, at that time, we all become obsessed.

two of the best things i have ever eaten in my life were enjoyed at funerals. what does this say about me?

sensei and i once likened the south to a haunted house and ourselves to rhett butler. the south, we said and wrote, is littered with extant remains. of which, as rhett butlers, we are keenly aware.

as southerners, we live our lives being careful not to disturb the bones.

we were talking and writing about the confederacy and our appalling heritage. but the bones exist on other levels.

my american life is curiously funereal. in a way that, i sense, other people's maybe are not.

which isn't to say that everyone else in the family runs around spouting reminders that we're going to die. (though garebear does do this.) just that there's, if not exactly a comfort with death, an acknowledgement of its everydayness. and the impulse, in its everydayness, to dress it up and, maybe, even make it a little fun.

perhaps this is simply to do with hanging out with people in their 60s and 80s, but i seem to remember that it has, always, to some degree, been like this. my parents have, after all, been discussing their DNR since 1996.

the impulse to fun up even the most appalling things is very my family.

whether the application of this impulse to the idea of death is to do with coming from my family or my family's coming from the country or a combination of both, i do not know.

(i do wonder if our hick tendencies are, perhaps, stronger than we believe.)

regardless, when burvil and i were digging through the pile of flowers that she and debo salvaged in their various dumpster diving adventures, it was fun. as it will be when i get behind the wheel of the buick she used to pick me up in from kindergarten and, failing to consult a map or get directions, we set out for a cemetery burvil can never quite remember how to find.

this is our normal. wherein everything is an adventure.

that this is our normal is also probably deeply strange. which is maybe what makes it less grim than it would otherwise be.

in the face of death, we adventure. knowing we will one day die, we salvage silk flowers from dumpsters. doomed, we feast and craft.
by oline

Email ThisBlogThis!Share to TwitterShare to FacebookShare to Pinterest
filed under: oline in america, southerners in the city, the family forward, the natural condition