the thing about the people who have died is that sometimes it appears as though they are not absent. thanks to our technological world, they kept popping up at random.

the other day, when i discovered the limits of my international phone plan, i was rummaging through my emails trying to figure out what the password was for my mobile account. and there was an email from donovan. a conversation comprised of seven messages. and for just a moment i was tempted to click on it and let myself go down the rabbit hole, but i knew it would be a distraction.

i am in paris to work.

i am in paris to write.

i am in paris to produce the remaining 40% of my dissertation.

i am in paris to get shit done.

but sometimes the absence is just there.

this is disingenuous. the absence is a wound at which i pick constantly because i am writing about my youth and death and grief and loss and aging and anxiety and 9/11 and fear and stars and america and i have left america and i live in london. what i am writing about is tied into who i am but, because it is what i have been working on for the last twenty years, it is also tied into the people who have been in my life as i've been writing it.

this is disingenuous also because the absence is actually a presence within the present out of which i write. but then sometimes, some days, it's felt as what it is.

and that is when it hurts.

today, there was this: 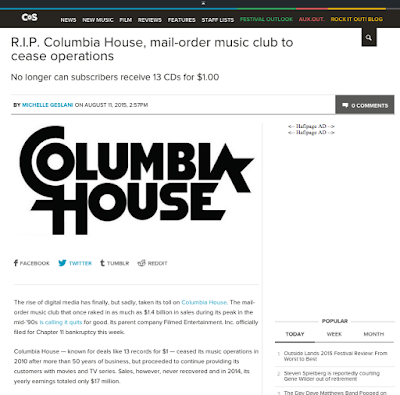 and, you guys, i wept. i fucking wept over the closing of the columbia house mail-order music club.

and the story isn't even going to sound good when i write it here, which is probably also why i wept.

it's a peculiar loneliness: when you have a story that only works between you and one other person and that person is gone.

but here it is: when i first met him, that first night when he came over to my dorm room to study for the english class we had together and we were just friends and he was pretending like he'd been a fan of u2 forever because he wanted us to have something in common, donovan told me that he was a member of the columbia house tape club. and i- who hadn't become cool enough to be a member of a mail-order music club until the CD-era and was eating a bowl of frosted mini wheats when he told me this- laughed so hard that i seriously worried mini wheats would come out my nose.
by oline