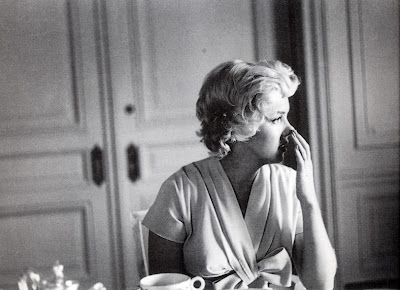 i dated a philosopher once. upon hearing this, my canadian penpal said, oline, what do philosophers DO? i told her their work involved long contemplative walks and staring pensively into the distance.

i'm writing the jackie tabloids book. yes, the truth of this fact is belied by the other fact, which is that i've said this at least five times. but- and we've discussed this before- sometimes the process of writing doesn't involve actual writing.

at the moment, writing about jackie involves no writing. it involves poster boards and long contemplative walks and staring pensively into the distance.

the common thought is this- jackie married onassis for his money.

and that was totally ok. because she was scared after the assassination of robert kennedy and so it's completely understandable and almost commendable that she would be desperate for the security onassis's money could provide.

this notion- this idea that she married for money- is preferable to the opposite. it's easier to swallow.

this dichotomy- this bizarre inversion of the moral code- has not been purused in the biographies. my mother's friend pinted it out when i was in new york in october. looking pensively down at the plate of assorted dessert cookies, she said that it seemed massively important.

it does. and, as is usually the case with things of massive importance, i don't have the slightest clue what to do with it.