1) i've come back to london. it's weird how hard it is to be present. KBG and i lay awake on a mattress in lindear's playroom last week discussing this in the wee hours of the night. how i was homesick for memphis since november and then like the very minute the plane landed, all i wanted was to be in the UK. now i am in the UK again. and it's not that i want to be back in memphis but there's a tension, the same tension that was so tedious those first few days of christmas. and i'm not sure how to explain it. all i know is that it's there and that it has something to do with being present and that, in a few days, it'll fade and i'll maybe be better at being where i am. but, in the meantime, it's awkward. hey. here. how about this: it is the feeling of no longer being where you were and not quite yet being where you are. which is total bunk if we follow the mary engelbreit/eaton family dictate of 'whatever you go, there you are.' but then maybe that slogan we ironed on to all those sweatshirts years ago was aspirational rather than true.

2) brutus came back with me. the degree of happiness i've extracted from this has only further enforced the fact that brutus is my patron saint, a fact about which i am deeply uneasy. 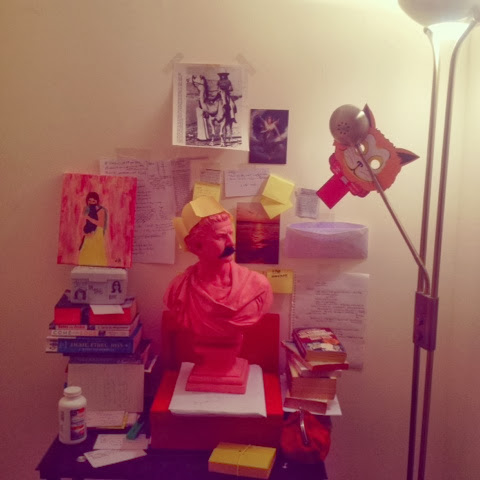 3) lastly, i read five days at memorial on the plane ride home. (because a family guilted me into giving up my window seat and taking the middle in a different row so they could all sit together [which is fine though i think there should be a general acknowledgement of IS THAT EVEN A CHOICE??! would any person traveling alone want to spend an 8-hour flight trapped by a window fielding evil glances from the parents they've kept apart??] and so there was no sleep and my fool-proof plan for conquering jetlag was fooled and i read a good book instead.) the thing that's been rolling over in my mind ever since is the idea that, in the wake of katrina, new orleans wasn't america. it's a defense used to justify the fact that people did morally questionable things, but removing that reason for the statement from the guts of the statement itself, what do you make of that? i can't figure out if the term 'america' is being used as an idea or as in 'the united states.' a small difference that it seems would either make a large difference or none at all. but, aside from that, isn't the point of the united states that we are the united states and indivisible? the notion that a city could be, regardless of how deplorable the circumstances, ever be seen as being outside of america strikes me as downright bizarre.
by oline

Email ThisBlogThis!Share to TwitterShare to FacebookShare to Pinterest
filed under: oline in the UK, the continuing adventures with kara beautiful gold

I love all of this, and have so many thoughts, but the one that comes to the front of my brain is... how did Brutus travel to the UK?? in a box? In your lap while you read five days at memorial?

brutus was carried on, much to the delight of the security screening people. he also looked super awesome under the xrays.