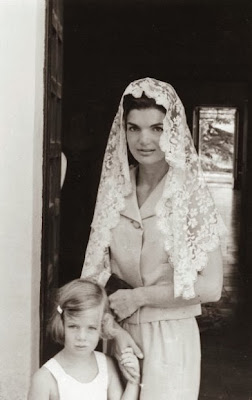 sister has blessed my project.

that means nothing, so let me back up.

several months ago (the afternoon i went on that date with the guy who thought all americans ride around in limos, to be precise), i did an interview with a nun who had taught caroline kennedy's catechism class.

she was an absolute delight. and her stories were useful.

it's a rare and special thing to speak to someone who knew and liked the person you're writing a whole book about. reaffirming, for obvious reasons, to know she wasn't a beast but was liked and that your image of who she was isn't terribly off the mark.

sister confirmed my image of who she was.

but, because i am the worst administrator of my own project, i forgot to get her permission on tape to use the interview in the book. and, because i am the worst procrastinator when it comes to correcting things i have not done, i put off approaching her for that permission until now. which necessitated a quick back and forth clarifying the fact that i'm not writing with pitchforks ready and the book won't be a hatchet job.

and then sister said ok.

but she didn't just say ok. she wrote a blessing. a really really lovely blessing that made the work i have to do next- the work i've been ignoring because supervision temporarily shook my confidence and therapy isn't until tomorrow- seem slightly less daunting.

because sister's talking to god for me. it will all be well.
by oline