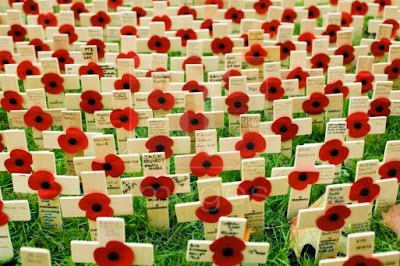 friday was armistice day in the UK. today is remembrance sunday. what that meant for me is that the church service that usually contains maybe 35 people on a strong sunday was suddenly packed and we sang the elusive second verse of 'god save the queen.' oh, and the lord mayor of our borough was there, as was his wig.

mr. lindear was in town the other day and in the course of our meanderings, we got to talking about the ways in which nationality defines the things of which one can make fun.

9/11, for instance, is something we take pretty seriously in the US. not something about which one really feels free to joke. but here in britain, there've been several occasions where i've heard people reference 9/11 in ways that i find border-line offensive, the border being the fact that the people saying these things aren't american and so 9/11 doesn't mean to them what it might mean to me.

this goes the other way. in the US, WWII is a conflict in which maybe our grandfathers or great-grandfather's fought. in the arc of the school year, it is also falls unfortunately towards the end and is presented in the context of pearl harbor, rather than larger problems brewing throughout europe since the partitioning of germany after WW1. so the world wars are less of a big deal in the US.

the great wars are huge here. in the sense that if you say anything less than totally reverent, there's an immediate pervasive sense of TOO SOON!

i'm not sure what the point of this post is, except maybe to suggest how unconsciously deeply nationalistic our world views often are. and how easy it is to be insensitive to the- now-distant or still recent- wounds that persist in other cultures, no matter how much time has passed.

Email ThisBlogThis!Share to TwitterShare to FacebookShare to Pinterest
filed under: america in the UK