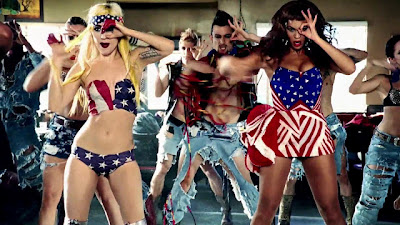 the problem is that it is now possible to be disparaged on two levels- as a woman and as an american.

that is, i realize, a privileged position to be in- so many people confront this on so many more levels (aside: read this). still, it is a problem nonetheless.

last night, a friend and i went out to dinner at one of those tiny cramped restaurants where everything is so pushed together that it is a dining experience not unlike riding the tube. because they kept turning around to check out the pizza of the people next to us, we became engaged in conversation with some british men. and, because they'd joined our conversation, my friend solicited their opinions on what we had been discussing.

as she and i weren't participants but witnesses, what we wound up in wasn't so much an argument as a verbal mauling. a situation that spiraled out of control so quickly neither of us could really understand what was happening, and at the conclusion of which these men literally turned their backs on us and said 'stupid american women.'

later, while i was in the bathroom, they apologized to my friend, but the experience was disconcerting. because it was connected to the fact that she had voiced an opinion. and it felt like that was not allowed.

which brings us back to 'smart girl.'

i HATE 'smart girl.' as everybody probably well knows at this point.

i mean, i can be a silly, stupid girl. it is, in fact, my default, my safe place, and something that's been discussed in therapy quite a lot- this sense that it is easier to play dumb than be real. but that is not who i want to be and knowing that imbues situations like this with a bitterness.

the problem with being a feminist is that once you realize you are a feminist, you cannot go back to the beforetime. you cannot un-see the reality you've seen. you're just plain stuck with it.

the problem with being an american living abroad is that once you realize how distinctly american everything you think and believe is, there is no going back, only forward.

this is an expansion, but it's also souring, in a way. to live somewhere is obviously an entirely different experience than going to visit. and just as people in chicago would disparage the south, so people in the UK disparage the US. but there's something far more dislocating about this experience as opposed to the other.

i will always be a woman. ain't no getting around that. but at least if i wasn't a southerner, i was still an american. if i'm not an american, what am i?
by oline