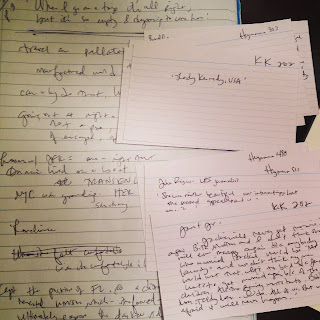 i've written before about the moment that, i believe, all writers live for: the moment where you can read what you've written and it feels like it was written by someone else.

because you've the distance from it to see it for what it is. words on a page. words that, across all of the pages, pull together to have value and meaning and to say something.

the flip side of this is the other moment. this is the place where i- and, presumably, some other writers?- live for the majority of the writing process: the hours/days/weeks/YEARS where i'm reading what i've written and it all looks like shit.

more than that, this shit infects all the other stuff i've written- stuff i maybe flattered myself was good. so that when- in search of sustenance, proof that i can, in fact, write and should, therefore, plod on- i go back and re-read that stuff, i discover it's shit too.

i am, at present, the queen of an empire of shit. like, the british empire at it's height. that empire. that is my shit.

the difficulty is working through this. continuing to write shit, even though you know it's shit, just to get shit on the page so you can have something to work with. because you cannot work from nothing. and a page covered in shit is better than a blank one.

i'm beginning to question my use of the word 'shit', so let's move on...

i've not been able to write for about a week. like, not even at all. other stuff, yeah, but not work, not jackie. (i have, however, watched the 1994 made-for-TV movie MADONNA: INNOCENCE LOST on youtube and it is, i tells you, riveting.)

i've not been able to write, in part, because i'm pretty sure i'm in good shape for the assignment that's due at the end of august, so's i know the work i want to do now is extra, a manifestation of my over-achievement more than work that is actually demanded of me. still, it's work i want to do, if only to ensure that i can sustain the voice i've used for one chapter over the course of two.

you know how when you finish reading a book and you don't know what to read next, where you want to go? (is this the monumental anxiety-inducing psycho-drama for everyone else that it is for me and my dad??) it's like that. i do not know where i want to go.

and the problem is that this is actually a part of writing- the waiting around, the reading, the notecards, the conference papers, the slow mental pulling together of things prior to putting them on the page. it isn't always possible to just sit and write. you need to gather yourself and your story.

and maybe by the end of the three years i'll have made my peace with the fact that this is normal, that this is- for better or worse- a part of my process. for now though, it's apparently going to keep me in a near-constant state of existential crisis.

which yields writing, so it is ok in the end. a constant give and take. a love of what i do and a hatred of how i go about summoning the nerve to do it. (btw, the fact that i've this much of an emotional melodrama around what i love should give you a glimmer of insight into the psychological CIRCUS that surrounded 8th grade algebra I.)

at the garden party, all these biographers went on about how their editors tell them who to write about and then they go do it. which is like, well, what?! because how on earth could you just pick who you write about? even worse, how could someone else pick it? that is the literary equivalent of an arranged marriage.

in light of this, i made a flippant comment that, while i don't have a messiah complex, i do have a bit of a buffy complex. i've had choices along the ways, yes, but jackie chose me. i've chosen how best to live with that, but she chose me. you guys, i am THE CHOSEN ONE, the one of my generation who has risen up to write about jackie.

yes, i am this ridiculous but, what the hell, it helps. particularly in the slog-through.

my god, i do not know how to end blog posts anymore! and so, in lieu of a neat and tidy ending, i'll give you this quote from one of the a.v. club's buffy recaps that, all of these years later, i still find incredibly profound:


All of that’s waiting in the wings, though. “The Freshman” is mainly about Buffy going through the painful process of self-discovery that so many do when arriving at college (or getting their first salaried job, or getting married, or buying a house, or having kids). It’s the process of realizing that while circumstances have changed, you’re still you. Whatever weaknesses you’ve always had, they’re still there. But the strengths are there too.

Email ThisBlogThis!Share to TwitterShare to FacebookShare to Pinterest
filed under: dissertating, writing in the UK

I'm having a really hard time with writing right now. Part of it is surely because this is the last thing I have to write before my dissertation, and thus is kind of the end of an era - I'm moving on to another huge part of this thing that I've been working on for years. But also, I definitely can't just sit down and write - I have to read, and work on other projects, and walk the dog, and eat, and go to work. When I do just sit down, nothing happens lately.

I can also sympathize with "the monumental anxiety-inducing psycho-drama" of picking the next thing to read. I've planned that, after I'm done and take my orals on the 22nd, I'm taking a couple of weeks to just read and really WANT to work on my stuff again. But what do I read!?! I've probably wasted hours of time stressing out about what to read after I finish the thing I should be doing instead of stressing about what to read.

It's a sickness, I think.