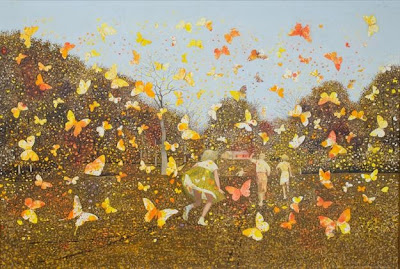 my parents are dying to know more about the forthcoming book on carroll cloar. that- and their love for him- is why they've been going to these events all summer. and yet they still haven't got a clear picture. bits and pieces, yes. but not a clear picture.

finally, a lady in some vague way associated with the book- the publicity identified her as the author whilst she called herself an assistant researcher, two positions between which lies a whole freaking world of difference- gave a talk, after which my father relayed his disgust.

she kept talking about other things and not about the book! he told me. twice, he raised his hand and asked when the book was going to be released, when they could expect it, what would it be like. because there's still no real idea whether it's to be a biography or an art book. my parents want a biography, not an art book.

but still, this woman who is associated with the writing of this book couldn't give him a clear answer. she just raised her hands and backed away and said she wasn't really sure, he said.

this has, in the end, made me feel far better about my own work, which is still 2 years (at least) from completion and over which i would never ever throw up STOP WHERE YOU ARE hands though it seldom could even be described as clear-adjacent. on my better days, i describe it as trying to find the words to describe the ever-shifting particles in a kaleidoscope. a romanticization of a process that is, in reality, more like trying to suss out a worm in a pile of slop.
by oline

Email ThisBlogThis!Share to TwitterShare to FacebookShare to Pinterest
filed under: dissertating, her home is on the south side high upon a ridge just a half a mile from the mississippi bridge