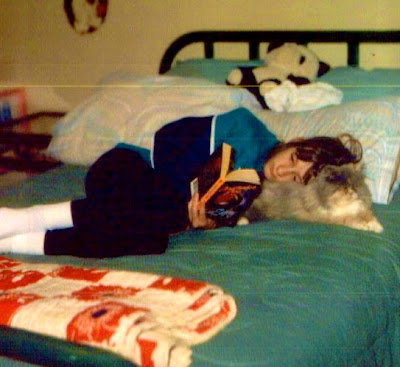 my dad is teaching himself to play the ukelele (the horn has apparently been abandoned). so there's been a lot of ukelele talk of late, but mostly we do as we've always done and talk about books (which then spins off into longer discussions of things like spanish flu before arriving at our eternal existential question: why do man-made disasters like war trump natural disasters in the collective historical memory?)

as has been previously established, there's a lot 'o communication in my family and, though i've moved AROUND THE WORLD (a family joke necessitates that be capitalized though it's likely no one will get the obscure allusion to an abc family made-for-tv christmas movie starring autumn reeser), we still talk a lot. as a result, with the smooshing of this timeline- and also the fact that events are unfolding simultaneously over skype and in letters- very small things assume a massive sense of drama.

under normal conditions, this is a fraught life choice but the tension is incrementally heightened when there's a near-daily update.

my father's been taking another tour through texts on the spanish flu. i keep trying to get him onto cholera (because, omg, so romantic) but he just won't go. but he also can't quite work up the nerve to reread all of the nero wolf books, so he's kind of just pacing about in a literary no man's land trying to figure out where he wants to wind up.

in the meantime, i'm zipping through the jackie bios that are widely available in paperback for under 1£ on amazon.co.uk and then also faffing about with random other stuff- some virginia woolf, gatsby, a slooooooooooow trek through mind of the south (which may well be my new waterloo), etc., etc. essentially, i'm reading like i've always read but the jackie level has been upped.

except this time i have put up some walls. i have forbidden certain writers. there are people who cannot get it. hemingway, for one.

'you must read a moveable feast!' my father said during his hemingway kick last may. 'before you go to paris! read it NOW!' (we eatons are nothing if not FERVENT.)

and i said, 'don't you understand? i cannot let hemmingway's voice in my head.'

because jackie exists in whispers. her voice is fluttery. when one is piecing together a quilt with materials the consistency of crepe paper, you do not let hemingway in the room.

he's found ways around this. around my self-imposed prohibitions. huge chunks of hemingway were read aloud over skype. we have watched midnight in paris SO MANY TIMES.

last night, my father read aloud excerpts from no less than five wall street journal book reviews, all of which came together to yield a quick study of the modern criticisms leveled against biographies.

there is, constantly, this passage of words and ideas- as i've said before, all of it strangely connected- like a river, or an electric current, flowing between us.

i say all of this so that you will appreciate the hilarity when, last night, my father- whose stopping and starting and stopping of stephen king's 11/22/63 has been a daily unfolding drama for all of july and who knows that i am currently in the middle of four books- looked deep into my pixilated eyes across the atlantic and, in utter sincerity, lamented 'it's so sad you can't read things anymore.'
by oline