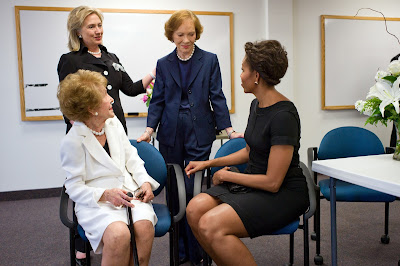 the root of about 76% of everything i do comes back to the notion that we need more visible women in american life. narratives with heroines. stories of unconventional lives, unusual jobs, unorthodox choices. photographs of vastly different varieties of beauty. and also that we need to acknowledge the impact such visuals have on girls.

this runs the risk of sounding shallow, as it's couched in terms of visibility and visuals and images- which are often glossy, superficial things- but it's not. this runs deep.

i find i'm having to situate jackie explicitly within the context of first ladies and so i've been thinking about first ladies a lot. i'm finding that the role of first lady is a tricky gig to explain. the easy way out is to compare the first lady to british royalty, but the argument's faulty. monarchy, these days, operates regardless of gender. the monarch is the monarch, whether the individual is male or female. the first lady is always going to be a lady until it's a man, and then we ain't gonna call it that anymore.

in thinking about first ladies, i've been thinking about pretending. about how, as a little girl i used to put on my mother's slippers and nightgowns and dance around the guest bedroom to michael bolton songs, devising routines so innovative that i medaled in the imaginary olympics multiple times. and how i acted out scenes from the documentary about the making of gone with the wind and pretended i moved out west to be a doctor named michaela and taught in a one-room school house in prince edward island, whilst surreptitiously writing stories that were accepted by women's magazines in foreign lands. i imagined i could sing like tori amos and dance with michael jackson and that i rebuffed all of the advances of all of the celebrity men i was in love with then who attempted to seduce me on an imaginary beach.

the one thing i never did was pretend i was president. honestly, until last week, it hadn't even occurred to me that this could've been something i could've pretended to do. first lady? yes. all of the time. from a length of purple and white checked fabric pilfered from my grandmother's attic, i fashioned an evening gown with which i wore an ill-advised hat. i waved to imaginary crowds and made lists of all of the charities of which i would be patron. i was an excellent (if slightly dotty) first lady, but that was the closest to power i allowed myself to be.

i could only ever be married to the president. imaginative as i was, being president was beyond my dreams.
by oline

Email ThisBlogThis!Share to TwitterShare to FacebookShare to Pinterest
filed under: dissertating, feminism in the city, jackie oh oh oh