1 a rather scary recently dawning reality committed to words 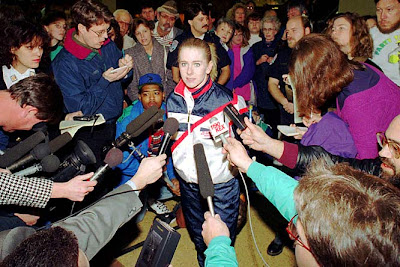 i am listening to whitney houston's 'one moment in time' trying to remember how it felt to be 11-year-old oline pantomime figure skating in socked feet and my mother's neglige around the bonus room of our diana court house in atlanta to the version of 'one moment in time' that came on a complimentary cassette that my mother got when she bought her 1992 ford escort.

who did that girl pretend to be? i'm pretty sure it was some 90's incarnation of scarlett o'hara on ice. i know it wasn't tonya harding.

and yet she was there. and it is she who is coming to get me.

everything, it seems, is going to come back to 1994. this is the point of historical intersection of everything i do. jackie. tonya. 1994. dr quinn has yet to reveal herself, and yet, at this point, she doesn't seem so radical a possibility for a written life.

with jackie, i didn't know that this was, what i wanted to do. telling life stories. it just happened. i had a magazine collection. croftie said it was cool. i needed to write something to get an M.A. and jackie was super easy. and so i wrote her. and so i kept writing her, because she turned out to be rather hard.

jackie and i made a three year deal in september 2010 and she recent renewed it. so, sly minx, she has bargained her way into owning 19 years of my life.

tonya, well, she ain't gonna get that much.

because, sweet jesus, i cannot give her that.

i've never wanted to write about anyone but jackie. until february of 2011, when the life of a random spy caught my attention and panned into nothing. since then, i've been on alert. poised. waiting. attuned. for whatever it is in a life that makes a life worth writing about. for whatever would come after jackie. the fact that tonya harding has stuck is probably an indicator that jackie and i are just about ready to part ways.

slowly, i'm realizing the next three years will be like an agonizingly long breakup. r.patz and k.stew. i know who i want to be with and yet- for emotional and scholastic reasons- cannot yet let go.

since this article on the hairpin, i have wondered. since last november, in the midst of all the packing, all the moving, i have known.

(still, just writing that, i kind of doubt it. because it seems so preposterous. the life and times of tonya harding? bitch, please.)

on the way to joe and burvil's last thanksgiving, in the exits between tupelo and mantachie, i told debo and gary. i put it into words. i said, 'i think i may be meant to write about tonya harding.'

i told them this. AND DEBO AND GARY NODDED.

(that is a key historical moment. dear people of the future, if ever you wind up on this blog because i won the pulitzer for writing the life and times of tonya harding, record this moment, wherein gary and debo nodded between between exit 87 veterans boulevard and exit 94 mantachi/mooreville.)

that is what makes things real. when debo and gary get on board.

the thing about tonya harding is that she is everything. jackie is most of the things. idealistic america. feminism. marriage. travel. adventure. but tonya is everything else. violence. rape. gunshots. mental illness. isolation. oregon. it is possible to take the seemingly preposterous view that they are two sides of the same coin.

i've absolutely no idea how that can be written beyond the sense that it needs to be a combo of in cold blood and anna karenina. tonya harding: the life, as a russian novel.

mind you, all of this may never be. it may come to nothing. it might amount to shit. still...

tonya harding is coming to get me. i feel it in my bones.

i wrote once that writing is a dark hallway down which we blindly strut. what i failed to mention is that in that in that hallway, stories come and get us. they hunt us down and assail us in the dark.
by oline

Email ThisBlogThis!Share to TwitterShare to FacebookShare to Pinterest
filed under: biogrophiled, so maybe tonya harding is demanding to be next, the family forward

this is awesome! YOU CAN INTERVIEW HER!!! her people are not dying everywhere! (...right?)