1 it's easier to call her burvil 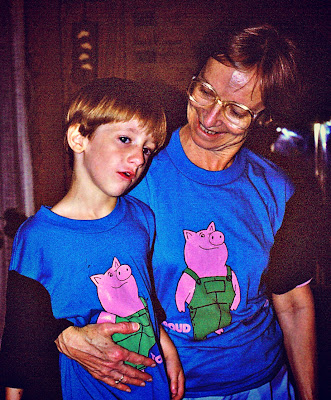 it's hard to call her gran because it's hard not to say 'gran and pawpaw.' they were- after all- a pair.

i'm secretly relieved when she calls him joe. she has slipped only once when, exasperated by how many photographs she keeps finding- photographs tucked into every corner of the house, the attic, his workshop, the garage- she said 'your pawpaw had more photographs than you could imagine.' it was the exact same tone she used when she was short with him.

you can, apparently, still be short with someone, even when they are no longer there.

but it's more than them being a pair. it's actually very little to do with him, and mostly to do with her. her in that context- as gran. as my gran.

we're talking once a week now at least and in these conversations we keep coming back to, she and i, the summer of 1986. when she quit her job at the law firm, bought a buick with power door locks (cutting edge then, now certified by the state of mississippi as an antique), and busted me free from the hell-hole that was harding summer camp.

libby and i had been enrolled in this exciting summer camp at this fancy-pants private school. granted, it might've been fun had we been older, but we were fresh out of kindergarten and entirely unprepared for the rigors of unsupervised play.

the highlight of each day was a morning trip to the local Y for swimming and yet, for us, this was a nightmare. my memory of harding summer camp is this: in a shower stall at the kirby Y, libby and i, tears of frustration rolling down our cheeks, stretching a cross-back bathing suit between us trying to figure out where we were to put our feet in order to enter this matrix of straps.

libby lasted a week and a half, i lasted one week more.

i don't remember complaining but, somehow, burvil knew. (burvil always knows.) she started picking me up early from camp. and every day, she came a little earlier until she suggested to debo that i should spend the summer with her.

and so we spent long days curled up on her couch under a blanket, giggling and watching judy garland and anne shirley over and over again.

entire years unfolded like this, as she would go on to pick me up every day after school, and i spent summers with her until we moved from memphis.

when i think of her as gran, in calling her that, i am that kid again, stuck between kindergarten and first grade, and she is a figure waiting beside a white buick, come to save me again.

she says, 'we sure had fun. they'll never know how much fun we had.'

and i tell her, 'yes, we did. i think that's when i fell in love with you.'
by oline

Email ThisBlogThis!Share to TwitterShare to FacebookShare to Pinterest
filed under: burvil, libby, the family forward