4 a few thoughts on boston market 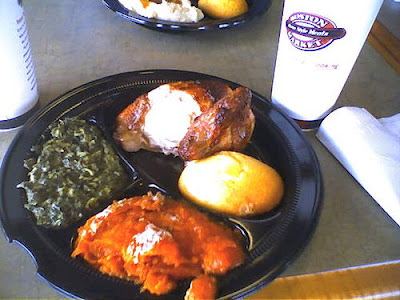 on election night, sensei, the dane and i went to boston market. half out of convenience, half in homage to our comrades croftie and dougo, recent boston transplants whom sensei subsequently referred to as crofto and dougie the entire night.

why we opted to homage them with cheap take-out comfort food, i'm not entirely sure, beyond the fact that our love for them runs that deep. to a strata where macaroni and cheese equates to a vegetable.

anyway, being at boston market- where the dane and i approached the counter with a trepedation i've not felt since partner and i went to subway in london and found ourselves completely overwhelmed by the language barrier presented by all those british accents- i was reminded of the only other time i was at boston market. the day i first moved to chicago the first time, back in september 2003.

the night before we left memphis, my grandparents and my mother gathered together, whispering about the dangers of my city life. burvil, making eye contact with me though addressing my mother, said, sighing with relief, "AT LEAST she won't be on the south side, praise god."

i faked a smile, not wanting to alarm her, knowing the south side was exactly where i was going to be.

why did we do this? i do not know. but, as result, our introduction to my new life in chicago was hard-core south side.

and then our shock upon seeing that someone in a neighboring apartment on my block had been evicted and all of their worldly belongings were being thrown out the window into a pile in the middle of the street.

in light of this, my parents took me to boston market. because we are southern and our first line of emotional defense is food.

despite the fact that i'd survived four years of college, my parents were suddenly stricken with great fear that i would starve in chicago. boston market was meant to diffuse this fear.

they said, "you can come here! it's cheap! the food is warm! it's delicious!"

and i remember with what enormous relief i listened to this litany on the wonders of boston market. because it seemed so safe after everything we'd seen that morning. so solidly there. i would come here often, i knew.

i thought this, i drew great comfort from the idea and then i never went back to boston market again.
by oline

Email ThisBlogThis!Share to TwitterShare to FacebookShare to Pinterest
filed under: maphery, retro, the family forward, the move

Firstly, thank you for the tribute! We thought of you guys on election night, too, and wished we were in Chicago with you. Miss you!!! Secondly, I WENT TO BOSTON MARKET MY FIRST DAY IN CHICAGO TOO! When I came for the summer orientation, I took the bus from Midway to U of C, and I almost cried--except that I was too scared to cry. I got off the bus at that Boston Market corner and I had half an hour until I was supposed to meet the MAPHer who was putting me up for the weekend. So I, too, went to Boston Market, lured maybe by the fact that I was living in Boston at the time, and the name was so very familiar. I ordered coffee. And looked out the window at the strange city, and wondered if I really wanted to move to Chicago.

I had no idea Boston Market had such emotional resonance for us all. Also, Crofto, I seriously considered getting the "Half-Chicken Meal" at Boston Market in honor of our Weber Grill Dinner that first night all of us actually lived in Chicago.

I'm late to the comment party on this one, but you guys are too awesome with your election night boston market hecatombs and such. We were clueless as to how to spend the evening with no rock bottom breweries or such around us. So I anxiously bit my fingernails on the couch while Lara fell asleep at 8:00pm. I then woke her up at 11:15 when Ohio was 'called' only to have her (Lara, not Ohio) have to wait until early Wednesday morning to hear 'Bams speech.

We miss you guys.