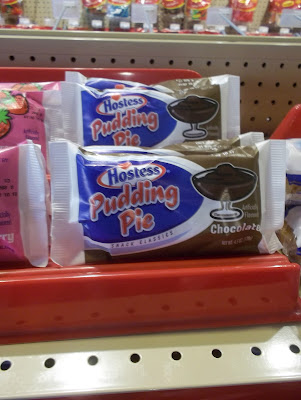 sometime in 2011, k.lo told me about the pudding pie. a hostess pie filled with chocolate pudding that, while plentiful in oklahoma, is as impossible to find in chicago as a unicorn.

cue my obsessive searching for the pudding pie.

not in an obvious way, as this is largely a game i've played on my own, automatically scanning every single hostess display i've seen in the last sixteen months. and never once did i spy a pudding pie.

let me set the scene... i'd been on the megabus for four hours and still had six hours left till memphis. we stopped at a pilot station at 3 a.m.

this was when i was heading to memphis to go to jackson for donovan's memorial. it was also when- because, stricken with grief,  i always either (a) apply fake nails or (b) experiment with lipcolors (a discussion for a different day)- i was test-running 24-hour lip color in a shade that was not the vibrant red i was expecting but instead a harshy purple. a harshy purple i wouldn't want on my lips for one hour, much less 24, but alas.

so we're at the pilot station, i've 9:30 p.m. lips at 3 a.m., and i go stumbling off the bus into the gas station and run smack into the hostess display. both literally and metaphorically.

and i kid you not, it was like angels sang because... THERE IT WAS.

what did i do? i went and peed. then i walked back past it to make sure i'd not imagined it and then i got back on the bus.

never once did it occur to me to buy the pudding pie, because i am a total fool.

the ride to/from jackson, my mother and i checked every gas station where we stopped but no luck.

so, on the bus ride back to chicago, i was deadset on buying the pudding pie. which i did. and it was dee-lish. a rarity i enjoyed as one enjoys something one never expects to encounter again.

which is comical now given how many times i encountered pudding pies this past weekend. and not just the one or two of the pilot end-aisle, but veritable mountains of pudding pies.