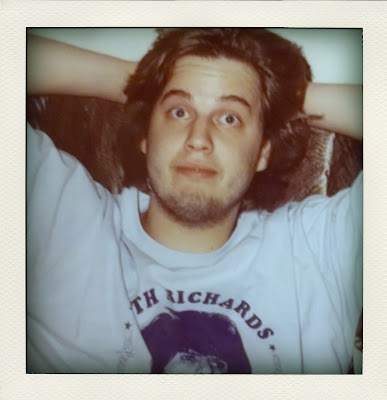 "i would never go out with her. she's been out with too many people i hate."

"the girth of that banana made me question the very fabric of my being."

"parents don't know about oral sex. it wasn't invented until 1987."

"i was dirtying up the dot box."

"my heart has been moved playing video games."

"it doesn't seem right that third world countries are being blown to smithereens and my prayers for pudding pops are being answered."

"not enough people wanted to drive to a warehouse in the rain and get naked after 10 p.m."

"cute and poor is always the way to go."

"we all were tense and stress peed in the parking garage downstairs. even the girls."

"in my 20 minutes in the sun a random man who had been sitting on a bench nearby- presumably for his entire adult life- came over to ask if i had any friends, specifically any 'man-friends.'"

"never move into a house with a bunch of people you love and a person who wants to fuck you."

"that is a terrible band name. but i just found out the improv group i've joined is called meatwhisker so i'm not feeling very holier than thou about it."

"you are very much of the night."

"he's probably all in there being mad at his math problems."

"you're trying to work... not being in a romantic comedy."

"forgive me, caroline, for i have sung."

"it's obtrusive in the lingering thoughts in my head."

"sometimes having a phone in your room isn't as glamorous as high school girls would have you believe."

"the total was 5-something and i had ordered 6 things off the 99 cent menu. i ask you- how can that be?"

"i just put my drumstick in the fan."

"you're not supposed to release the first song on your album with a string section. you have to work up to that."

"if they didn't squint so hard on the prayer channel, then perhaps i could believe them."

"i had no letter control... i was like vanna white!"

"if you're not dating a celebrity, i can't know your whole band."

"i think you're a thomas eddison, i'm just waiting for the lightbulb to go off."

"i don't know about guys who date winona ryder or drew barrymore."

"just because i don't create anything doesn't mean i'm not arty."

"at this point in my life, i need to be in high school."

"she and i spent the weekend further complicating the relationship. we dressed up and took hand holding pictures."

"we have become what he calls 'snuggle buddies' and are in danger of having to use the 'it's complicated' facebook status."

"the girls album is pretty frontloaded but it's a great load."

"she is jewish so that's new and i kissed a black girl named talara on the lips like two times during the parade."

"it came close to derailing celibate summer when one of my dance partners started eskimo kissing me but then i turned it into a group activity and had about 10 people all rubbing noses."

"so, last night i brought a lesbian home..."

"y'know, i've got toothpaste on my zit and i had to be public the next day so i was in no mood to meet people."

"i was like, 'dude, did you know you had 5 different girls at our house over the weekend?' and they used ALL of the toilet paper. i mean, there wasn't even a square left."

"i get lost in the fact that life is too funny for God not to be hilarious."

"it was a PILE of awkward sponsored by me and underwritten with a grant by her."

"the clap is not a venereal disease... not tonight."

"so i would say that redeemed the experience- $45 for three hours in a hotel and a waffle."

"if my mother becomes a crazy old lady... i mean the cats don't live in the house but..."

"it's worth a listen thought it's not as deep as lady gaga... and, who, a year ago, would've ever thought of calling lady gaga deep?"

"honey, boys do not kiss girls in caftans."

"that was back when AOL was still mailing the internet to your house on CD."

"you may be sober but the night is drunk."

"let me ask: how much do you think this situation resembles bright star?"

“sandwiches will take you places."

"vanilla vodka is me personified- a little bit girlie, but still hard liquor."
by oline