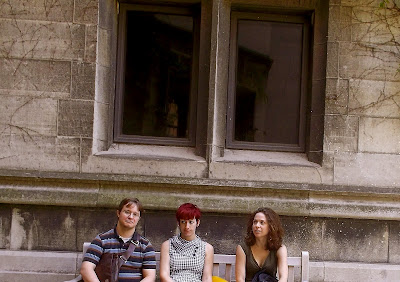 fyi- this picture?
totally going in our norton anthology "did you know..."

we went to hyde park this weekend. the NLB, i mean.

i tried to explain this to jmills when we partied radical on friday night. she was all, "what are your weekend plans?" and i was all "um...[cringe] writing group is going to [cringe] hyde park [CRINGE, miming of a turtle trying to stick its head back into its shell]."

if you weren't a mapher, you would think that, in going to hyde park, we were venturing to a semi-suburban intellectual wonderland. but, if you were a mapher (or, according to sensei, if you ever attended the university of chicago at all), then your response to the fact that we were going to be in hyde park would be markedly different.

dOugO, for instance, would let out a sharp exhale. croftie would hiss.

i really really loved maph. maph was fundamental to who i am today. my jackie book was born there. a solid 50% of my friendships date from that year.

because maph was really fucking weird. right? you people who were there, chime in. second this, so we'll have recorded in a public forum that it's not just me.

as the years go by, more and more, i find maph is becoming like memphis. (for reals, compare this relatively rosy 2006 evaluation to what you're reading now.) a place i am proud to be from, a place i will defend to my dying day. a place to which you could not pay me hundreds of bazillion dollars to return.

yes, it's fundamental. yes, my brain likes to vacation in maphland every now and again. and, yes, i glee in reading candace's marxist emails about cats and solicitations for donations with an inner commentary of total WTF? but... CRINGE!!!

the maph parts of my mind are cordoned off by an electric fence.

the maph parts of my mind surface unbidden, and the resulting internal revulsion is like a bird hitting glass.

as we were strolling through hyde park on a sunny saturday, sensei and the dane were struck by how happy everyone looked. we were surrounded by smiles in the land where fun comes to die.

sensei put it in perspective: at william & mary, he had felt as though he never lived up to the amount of fun william & mary had promised. the university of chicago never makes such promises. quite the reverse.

it is a classically beautiful campus. once there, you breathe in theory like a drowning man does water and prepare to die alone.