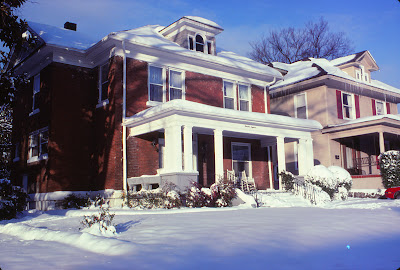 right smack dab in the middle of my 16-month memphis incarceration, between maph and moving back here, donovan and i went to a barbecue held in the backyard of one of his bandmates.

it was his last day of teaching and he knew he wasn't going back. he was drinking champagne.

in the course of chatting up one of his bandmates, it came out that (a) i worked for PROUD, (b) PROUD was not a gay magazine, and (c) the bandmate and i had grown up in the same house.

true story. a few years into their marriage, my parents left their humble abode on scarlett leaf in east memphis and bought a dumpy victorian spread in midtown that they intended to rehab. it was located in annesdale park, one of memphis's ritzy historical neighborhoods, which- thanks to white flight- was suddenly ghetto-adjacent.

(fun fact: when donovan and i were vetting apartments during our Season of Sin, we looked at one catty-corner to this house, a testament to our spending power.)

so basically, just imagine gary and debo and the plot of the money pit.

but they did it and they did a dang good job. by the time i was born, the thing was in ship shape, excepting the ancient clawfoot tub inexplicably abandoned in the backyard.

they did such a good job that, at some point, people actually paid to take tours of our home. like how, during their tour of the lakes, lizzy bennett and that aunt and uncle from cheapside barged in on darcy to gawk at his busts.

for reals. there's a brochure with an artist's rendering and the words "EATON HOUSE" in bold.

we never actually called it that though. it was always "the midtown house." so it was odd when donovan's bandmate, upon seeing my name in an issue of PROUD, said: "wait... are you one of the eaton's of EATON HOUSE?"

as it turns out, when my parents sold it- opting to move across town rather than install me in memphis city schools- they sold it to donovan's bandmate's parents. he had come to view it before we moved out and vividly remembered the strawberry wallpaper of my bedroom and star wars action figures littering the floor. as children, he and i shared a room and the same hiding places. and so, upon hearing that our house was for sale yesterday, though he and i haven't talked in years, he was the very first person i told.

there's a part of me that really wants to go back. to somehow bribe the real estate people into letting me crash there for a night, in that room that was once papered in strawberries and  littered with star wars weaponry, so i can write whatever story might come of that.

i want to. but i won't. because i know we can't go back.
by oline

Email ThisBlogThis!Share to TwitterShare to FacebookShare to Pinterest
filed under: home sweet home, i once owned all the original star wars figurines and then inexplicably GAVE them to the neighbor boy when we moved away from atlanta and that is my biggest life regret, the family forward