17love is all around 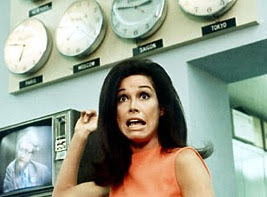 i got hooked on MTM's nick@nite reruns in the winter of 1993. i began obsessively taping them in the spring when MTM was dropped into a most inconvenient 2.30 a.m. time slot. from there she moved to 4 a.m. then on to 5.30 a.m. i taped her all the way, running down first thing every morning to make sure i hadn't mistakenly recorded welcome back, kotter instead. many a time, mr. 20th century fox, i mistakenly recorded welcome back, kotter. the disappointment still smarts. you just don't know.

because i could only nab so many tapes from father cupcake's VHS stockpile and because i am sometimes a fool, during my summer of '96 fanatical GO ATLANTA BRAVES kick, i began taping over MTM. baseball games are, after all, so rewatchable and MTM would, after all, always be on television. right, mr. 20th century fox? wrong. in the fall of '96, she inexplicably disappeared from the nick@nite landscape. baseball is forever. MTM apparently is not.

i was left with three 6-hour tapes in which the first two hours of each were dedicated to braves baseball. the legendary game against the marlins where, in the bottom of the fifth, fred mcgriff's fly ball hit a support beam and made an enormousPONG! noise. the immortal time when a fan deflected marquis grissom's homerun into foul territory in the first inning only to catch marquis grissom's second homerun ball in the bottom of the fourth. the game against the cardinals where chipper forgot to tag homeplate, made it halfway to the dugout before realizing this, and then scrambled back like a little girl.

remember those moments, mr. 20th century fox? probably not. because those are moments so inconsequential that shortly after the fact it seemed entirely unjust that they should be obscuring a collective six hours of classic television. for years, as i watched and rewatched and watched again the same 36 episodes of MTM, i cursed my baseball fandom, which had deprived me of an additional 12.

then MTM resurfaced on TVland in early 2000. there was still hope, mr. 20th century fox! all was not lost! this time, i was prepared. armed with a slew of 8-hour VHS, i would finally have my mary tyler moore show. i followed her all over the schedule: from 8 p.m. to 2 p.m. to 8 a.m. to 3.30 a.m. we didn't have TVland at school so for two solid years i held the parents' VCR hostage and meticulously set it up to record in my absence. the parents, of course, loved this.

you can imagine my excitement then, mr. 20th century fox, when you came to my aid in the fall of 2002. when you, mr. 20th century fox, began releasing the mary tyler moore show on dvd. there was season one. it was glorious- restored and remastered and hilarious as ever, with an insert promising the release of season 2 in march 2003. and i was so grateful to you. i sang your praises. i had faith. and because i am a fool, i began taping felicity reruns over my MTM tapes.

finally, presumably roused by MTM's unprecedented success at the 2004 TVland awards, in the 35th month, you stirred to action. season 2 came out in september of 2005, with season 3 following promptly in january 2006 and season 4 in june. we were on a roll, mr. 20th century fox. i almost began to think that we could be friends. i no longer clenched my fists and shouted curses at the sky upon mention of your name. i had almost forgiven you, mr. 20th century fox.

then you went and played the douche card.

mr. 20th century fox, your commitment issues are alarming. you had 34 months to get your act together, not to mention the last nine, and yet you have failed me again. it isn't me, it's totally you. first, you killed marilyn, and now this. clearly, we cannot go on. what is with your ridiculous hatred of all things MTM, mr. 20th century fox? why pull the plug at season 5? and, if the word-about-town is true, why take newhart with it? what did mary richards ever do to you?

in conclusion, you are an evil, conniving, wicked, dirty, rotten, level 10 shit, mr. 20th century fox. i will cut you.
xo,
o.
by oline