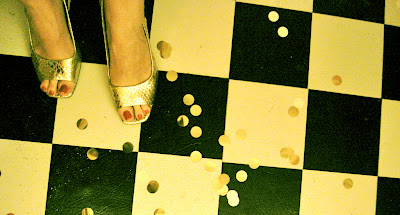 there's this sense that creativity and unhappiness go hand-in-hand. i don't agree. but then, that might just be because i don't want it to be true.

in 2009, i slipped into a somewhat substantial depression. just prior, i'd been on the cusp of renouncing my belief in god. after, that was no longer an option.

suddenly, i was pulled toward the idea of god with such a ferocity, such a physicality, that it felt as though i'd got whiplash. i had to believe. which was and is and will likely continue to be both an enormous inconvenience and an incredible relief.

in the fundamentalism of my childhood we were told to develop grandiose retellings of our encounters with christ. when we proselytized, these moments were meant to be bared before all, brandished like gilded swords.

but i don't like christ and i do not want to fight.

i'm a horrible christian for many reasons. for doubting god and dissing christ and for the fact that some times, many times, the lord god almighty makes me mad as fuck. but also because i don't like talking about either this experience or that time in my life.

i have a moment, yes, but i don't want to share it. with anyone. not even jesus.

when i was a kid, they encouraged us to kneel when we prayed. i prayed but i didn't kneel and i didn't bow my head or shut my eyes. if god was going to show up i didn't want to be puddled on the floor with my eyes closed. i wanted to see.

i pray on my knees now. puddled on the floor with my eyes closed. i never prayed like that then. there is no other way now.

even with belief, i am often unhappy. without it, i would, i know, be bereft.
by oline