prague is cobbled with cobblestones.

i didn't notice this until after a day or two of walking. and even then, i didn't link the agony in my calves with its true source. instead i blamed the walk that blah and i made up a "mountain" and through some unsuspecting czech's backyard in our attempt to reach the eiffel tower of prague and then, also, the 299 steps required to ascend it once there.

when my calves were painful to the touch three days later, i blamed that aerobic ordeal for what was, i later realized, clearly the cobbles' fault.

cobblestone is the most sadistic of pavements. flats, flops, heels, doesn't matter. any form of footwear you can find is rendered helpless when confronted with cobbles. podiatrically speaking, they are kryptonite.

you don't believe me?

i was in prague for 4 days. 2 and 1/2 of them were spent sitting in a room in a palace. whycome my shoes look like this? 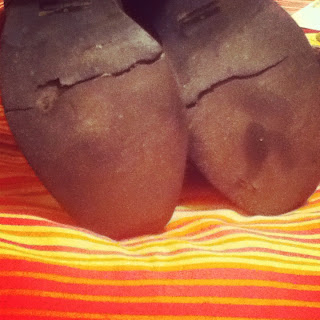 My theory is that all the cobblestones are simply my people's way of getting back at all the other peoples who felt it necessary to rule over them for all those centuries: "Come visit/invade/overrule our beautiful country/sovereign nation/democratically elected government? Sure, but then we will make your/your children's/your grandchildren's shoes and calves pay."

"Oh, and while you're here, would you mind standing next to this window? The view is much better..."