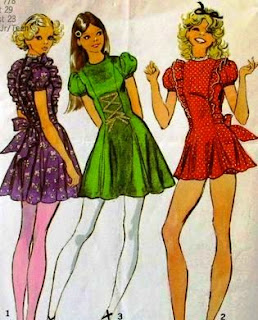 by which i mean (my god, i'm saying "by which i mean" a hell of a lot these days), it doesn't even come close. it's second knuckle... at best.

i don't know that there's a male equivalent for this- the extraordinary phenomenon wherein one can look downright chaste in the mirror at home only to arrive at work dressed in an outfit better suited to a night in the clubs or a day spent working the streets.

jmills told me i can't wear mini-dresses past the age of 35, so i've recently taken to them with the fervor of the condemned woman. it's possible i've outdone myself here.

because this dress is almost too short. i've wondered if there can ever be such a thing, but the reality that i've got to deliberately pull the hem and tuck it under my ass every time i sit down may be an indicator that i've limits.

three times now i've wondered about this dress... is it maybe a top?

It's not my rule. It's straight from the mouths of the What not to wear team. I just happen to agree. but then again, maybe I'll feel differently at 35.