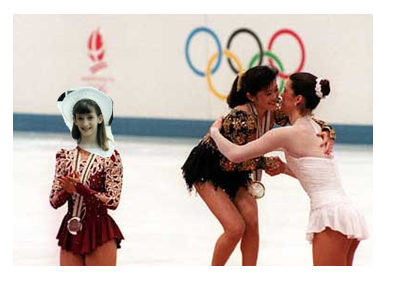 the 1992 winter olympic games were ridiculously dramatic. there was nancy kerrigan’s blind mother and kristy yamaguchi's clubbed feet and that one really, really moving coca-cola commercial. it was almost too much, especially for any child who was highly susceptible to drama.

as a child, i was highly susceptible to drama. and so, though my mother wasn’t blind and i didn’t have clubbed feet, by god, i was going to be a figure skater. i was dead set on it.

beginning that winter and continuing on for more years than i’d like to own up, i trained to be an olympic-level figure skater. by which i mean, i mimed figure skating moves to the tune of michael bolton’s “how can we be lovers?”

in my bedroom. on carpet. in socked feet.

it’s likely not at all surprising that during this period i sustained repeated physical injury. i broke a wrist, suffered extensive bruising, sprained both ankles and bloodied my nose.

(when you‘re an easily embarrassed fragile lass, attempting triple salchows in your mother’s negligee and chenille socklets = not the best idea.)

but even that didn’t stop me. i was on a mission. i was gunning for olympic gold.

mind you, mimed figure skating in socked feet isn’t something one can pursue out in the open. and so, i went after it avidly behind closed doors— never once owning up to my activities in my diary, never once explaining to my mother why all her slips had disappeared.

had i ever pursued figure skating on actual ice, i’m fairly certain i would’ve been proficient. alas, i only ever skated on actual ice a handful of times, and it's hard to achieve olympic-level athleticism in ice skating when one is confined to cut pile.

maybe this is why, in all my years of mimed figure skating in socked feet, i never once awarded myself the gold medal. instead, alone in my room, i lavished myself with silver and bronze.

while i'd prefer to blame this on my egregious youthful humility and the unavailability of gold reynolds wrap, i’m pretty sure it had nothing to do with that.

i'm pretty sure that, despite a seemingly bloated faith in my own figure skating abilities- never mind the lack of skates, ice, clubbed feet and talent- on some level, i believed i was not good enough. that i would never be good enough, not even in a pretend world and with a classically stunning short program set to “said i loved you, but i lied.”

it's things like this that make me wish we could go back and reward our younger selves. because the field of socked-feet figure skating mimes is terribly small and i see now what i didn't see then. that i was deserving of those gold medals. every single one.
by oline

Email ThisBlogThis!Share to TwitterShare to FacebookShare to Pinterest
filed under: o young oline, the family forward

love this, and LOVE the pic.

that was totally for your benefit.