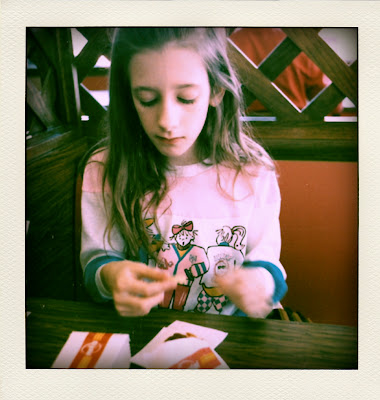 i was a super cool kid. in third grade, on the playground, i hawked contraband copies of "papa don't preach." and in third grade, like a total badass, i once told missy dean to "shut up." majorly super-cool. but don't worry. it didn't last.

around fifth grade, my hold on the coolness began to slip when my mother made me a romper. and we're not talking a romper like they sell at urban outfitters in the summer. it was, in hindsight, a wee more ronald than that. at the time, i fancied it the height of cool.

striped with a rainbow of sherbertesque pastels, i believed both the style and the fabric to be "fashion-forward." louis abercrombie laughed. though i never wore it again, louis abercrombie called me "caroline clownpants" for the remainder of the year.

(let the fact that absolutely no photographs of this ensemble exist be a testament to the trauma it provoked.)

in light of this, i sought salvation and solace from the most obvious source- conspiracy theories. asking all judy blume style, "elvis, where are you?" i arrived at the fervent belief that he was alive and living in kalamazoo.

i can't stress enough how great a role the bill bixby PBS Television Events played in the furthering of my delusion. the elvis files and the elvis conspiracy. two programs of two hours each wherein the actor bill bixby screened amateur footage proving that elvis was alive.

the thing that it's really hard to wrap your head around, the thing you really have to appreciate about the bill bixby PBS Television Events, is how authentic all of this seemed at the time.

i was eleven. i'd never seen a movie by oliver stone and i'd heard about elvis all my life. in truth, i'd never heard of bill bixby but there was bill bixby right there on my television screen telling me about his friend elvis. and there were all these other people who knew elvis and they said he was alive. and then, holymotherofgod, there was elvis calling bill bixby to say that he needed me to find him, because he was alive!

and so, while the other children frolicked on the playground, i huddled in the corner of the children's world after-school daycare center searching for answers amidst the pages of the gail brewer-giorgio classic, is elvis alive?

(you may wonder that i had any friends. fortunately all my daycare relationships had been solidified at the Audible Energy activity station on a snow day earlier in the year when- thanks to the skills acquired in the wake of mrs. christian's comment that it would be better for everyone in the competitive church children's choir if i simply mouthed the words- i gave a rousing lip synching performance of bruce springsteen's "born to run."

but for the boss it is quite possible that, given the potent combo of elvis conspiracies and clownpants, i might have already, even then at the age of eleven, been well on my way to dying alone.)

as it were, i not only had friends but a veritible mission field from which to win converts to the cause.

how could we play marco polo?! elvis was alive!

my father used to always say that you can't be on fire all the time. he was speaking about fervancy for god, but the thought holds true here just the same. i'm not entirely sure when the elvis conspiracies stopped making sense but, as all fervencies do, even this died down.

eventually, my family moved to a place where no one cared that i could recite the soliloquy from "are you lonesome tonight" and everything changed. yet, nothing really did.

in my heart, i am still caroline clown pants. it's likely i always will be.
by oline