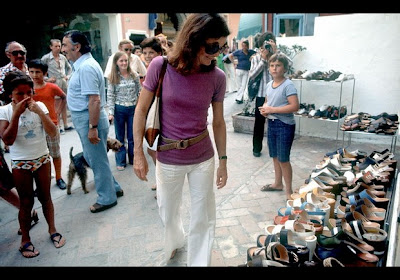 i tabled this in my head. it's an endorsement that will take time to process. sometimes i don't even like that i'm doing this. i can't imagine how jackie could.

i've been doing whatever you want to call my whole jackie thing for the last 17 years. that's not an exaggeration. it's been that slow of a burn.

but there's still just enough doubt lingering there to necessitate the word "pretty," and that little "pretty" goes a long way in rendering all my certainty null.

on tuesday night, caroline kennedy told diane sawyer that the main lesson her mother would have wanted people to draw from her story was that life is an adventure, always. when she said this- thus, giving credence to everything i've ever written on a hunch- i felt a wave of the cockiness that must've compelled babe ruth to call his shot.

the "pretty" is dead. i know i'm right. someday, even if it's a day still 17 years away, just you wait. i am going to knock one out of the park.

Basically, if we refer to the Jackie tapes, Jackie O. would have liked you better than Martin Luther King, Jr. High compliment indeed.