0 Movies You Really Should've Seen By Now If You Want To Consider Yourself A Grown Person: Shakespeare in Love 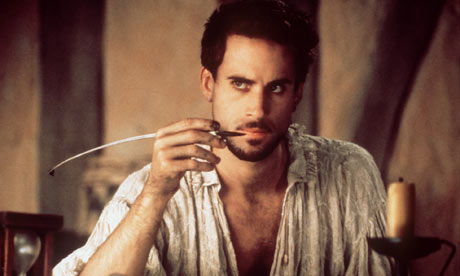 first things first, dude. WHY HAVE YOU NOT SEEN SHAKESPEARE IN LOVE??? featuring gwyneth, tom stoppard, a finnes brother and colin firth, shakespeare in love is basically a calvacade of everyone on whom everyone had a crush in 1998.

thanks to shakespeare in love i will always seek out lovers who woo me by quoting extensively from their own work and, upon having attained them, assume our love is doomed.

tee hee! ha, ha! levity. now, let's be for serious... the number one major big-time thing that shakespeare in love gives us is totally important. it's a life philosophy that it behooves all us adults to have.

i don't know what it says about me that i believe the greatest wisdom of adulthood can be captured in three lines uttered by a geoffrey rush character in response to the news that the elizabethan theaters had been closed due to plague, but here you go: "the natural condition is one of insurmountable obstacles on the road to imminent disaster. strangely enough it all works out in the end... it's a mystery."

life is shitty. it often seems shittier than it maybe even is. but in the end, even in the midst of the shittiness, there is also mystery and magic and, ultimately, the hope that all will be well. TRUTH. what more reason do you need?