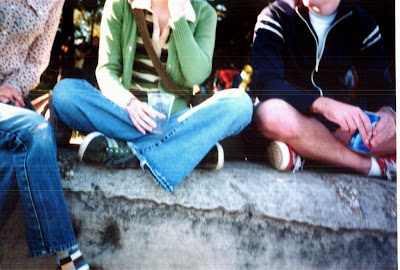 it's our maphaversarie. (yes, i not only remember the date of everything we did two summers ago but also everything else that has ever happened. creepy times ten.)

in light of this, it was only fitting that i'd make the pilgrimage down to hyde park for the first time since the philosopher and i went to a philosophical party on a famous philosopher's rooftop in june 2009.

i remember maph as a prolonged dream sequence and returning to hyde park all these years later is much the same. it's not twenty miles away still it's like entering another world. i'm dogged by a sense of not belonging and of never ever going back.

walking past the place where barack obama and i got our hair cut, i'm struck that it is exactly the same. this is the troubling thing about hyde park.

obama is president. i'm a biographer. the metra train now costs a whopping 50 cents more. but there's the light hitting the sidewalk outside 57th street books just as it did when i walked home from writing arts reviews listening to interpol on my discman way back in september 2003.

everything in life changes but HP always looks the same. it is the dorian gray of small towns.

i wonder how different maph would've been if we'd all had blogs back then. i imagine either more real or just more confusing. as it was, we only had university-provided dial-up and friendster accounts. i swear, we're not nearly as old as that makes us sound.
by oline

either i am totally cheap and unwilling to buy new clothing for decades at a time or we're not THAT old seeing as I totally wore that coat to work today.

Kept the gams covered up though. Sorry, ladies.

a. that is not a coat. it is what everyone outside of buffalo refers to as a "windbreaker." it is not rendered more coatlike by the fact that you wear it all through winter.

b. everything i am wearing in that photo has died. the striped shirt, the green sweater, the bellbottomed jeans (WHY?!) and the green shoes. horrible deaths filled with holes and snags and unglued soles. i envy your "coat" its longevity.

c. i don't believe you have ever again shown so much leg in public.

This. This is exactly how I feel about Hyde Park every time I go back. Like I was never really there. Like I never left. Like I don't belong and never belonged and only deluded myself into thinking I belonged.

Friendsters and dial-ups. Man, we are too old for that place.