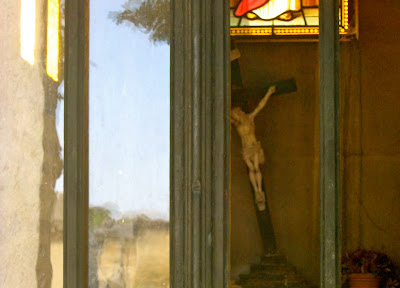 as a kid, i spent three years in a church best described as southern baptist fundamentalist. this seemed normal at the time. it's all very waco in retrospect.

i first heard of abortion in church. from the pulpit, abortion and the election of bill clinton were hailed as the twin proofs that the beast slouching toward bethlehem had already arrived. poverty and hunger excited few to advocacy but, upon the announcement of impending pro-choice legislation, an army of god's people arose, eager to march.

the youth ministers organized a "young people's rally." the phrase "non-violent" was repeated often. videos of protests taking place outside abortion clinics were shown. in the footage, a man spat in a woman's face.

i was eleven. i'd not gotten my period. i could not yet bear a child. i didn't know what the word "abortion" meant, but i was sitting on the floor of a trailer beside a church outside atlanta, scrawling admonishments to would-be aborters on placards in mr. sketch scented watercolor pens.

by then i was watching geraldo rivera live every morning before school and, accordingly, had a highly developed sense of right and wrong. geraldo had just done a special on the ku klux klan and- sitting in that trailer, seeing that video, watching that man spit in that woman's face- i recalled that episode and every fiber of my being knew that what we were doing was wrong.

i knew i was complicit in an act of violence that i did not understand.

more and more, i realize most all my distrust of christians and church stems from that moment, in that trailer, where i scrawled admonishments to would-be aborters on placards in mr. sketch scented watercolor pens.

before that, i'd never seen real cruelty. i had not known that there are people who, in their eagerness to dole out god's wrath and judgment, ignore the command to love.
by oline

Email ThisBlogThis!Share to TwitterShare to FacebookShare to Pinterest
filed under: faith in the city, southerners in the city

When will we get it that hate only breeds more hate? that love is more powerful than placards and posters? that ignorant and hateful words can be far more violent than fists and guns?
sigh...

and i love this (as much as one can love a piece that is on something so sad).

i'm very glad you love because i'm about to lay down for your review the buffet of everything i wrote this winter.

It was the prohibition against loving Wiccans that did me in. Have I regaled the NLB with that story? Wiccans. All over my life.

I want an NLB and I want one NOW! Berlin isn't coughing one up too quick and there's already a creepy writers group seeker ex-pat I have to avoid. Already! That's all. Oh, except that I really like this post, especially the last line. You give v. good last line.

Beautifully said (as usual). It gets my blood boiling that these people call themselves Christians and yet feel nothing but hatred for their fellow men (and women).

i feel like i just won the pulitzer there, miss kbg!

teehee. sorry i'm not more demonstrative. what can i say? i'm a woman of few words...