5 "what happens in paris" 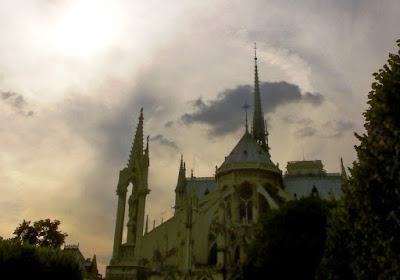 "what happens in paris" is the new "my father had this girlfriend." it's nothing to do with any of the eight things i'm supposed to be writing but it came tumbling out on my flight home from london and, as the title might've led you to believe, it is about what happened in paris.

it's the first thing i've written in longer than i can remember that's come out fully cooked. it was done from the get-go and the words just fell in. now they need to go out and get themselves published.

i do not like this part. well, that's not entirely true because i like pieces of this part. the bit between when you send something out and when you receive the notice that it's been rejected- y'know, the part where you assume it's been accepted and mentally award yourself every literary prize known to man- is actually quite nice but then comes the rejection and you're robbed of both the imaginary awards and the pleasure of having your words read by actual other people.

"what happens in paris" has been strutting her stuff for five days and has already earned four rejections. though a trifle annoying, i try to see it as a good thing. because, much as the whole world of indie lit mags knew my father had this girlfriend so too will the whole world of indie lit mags know what happened in paris. they may not care, but they will know. and maybe that is enough for now.
by oline

Email ThisBlogThis!Share to TwitterShare to FacebookShare to Pinterest
filed under: oh paris, rejection in the city, writing in the city

I love you and your imaginary awards. I hope a few of them are sparkley.

Oh God yes. That moment when it's done and sent out and you just wait for the praise to stream in, then two weeks pass without an email and your expectations come down, then more weeks pass and you think "I guess it's rejected" and then EIGHT MONTHS PASS and you think "how rude" like the poor middle child on "Full House." But anyway, "What Happens in Paris" is going to college. On scholarship. No, not just college. It's deserves Ivy League. It's going to Cornell. And it's going to sexy dance there.

you seem to be pretty good at predicting these things, sensei, so i trust you're right.

I'm not as prophetic as Croftie, but I'm pretty good. I think it's that toast in Vermont...

but it's just toast. i do not understand its powers.