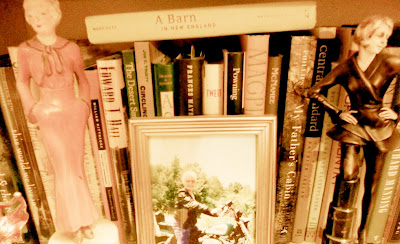 i grew up in a house that always had a library. we weren't wealthy by any means, but there was always an extra bedroom my dad claimed for his books. we moved a lot and each time we did, he would tour all the rooms, walk into one, announce this is my library! and promptly set up camp.

in our house, a library was something one cultivated and built and had. it was where one put one's mayan statues. upon the arrival of unwelcome relatives, it was the room to which one fled.

a library required neither a decimal system nor a card. public libraries require both systems and cards plus catalogs and archives and holdings and whatnot. that is why public libraries have always felt unreasonably inconvenient. in their unpleasantness, they are not unlike the DMV.

it is also why this past weekend i approached the attainment of a library card at the chicago public library with the solemnity of someone about to take a citizenship test.

i was cognizantly opening myself up to a whole new way of reading. with a library card, i would have access to thousands of books. i would be reading books read by other people. books touched by who knows how many pairs of unwashed hands.

i saw this as a fundamental emotional shift from the personal to the public and the outlandishness of my pride in taking this step knew no bounds. it was a bold move into a brave new world. alas, my pride was quickly squelched.

to the employees of the harold washington library my bold move looked like little more than just another kid, oblivious to the copious (obscurely placed) signage, asking where to go for a library card. and i say "everyone" because in the midst of my oblivion and excitement and general sense of lostness, i approached person after person to proudly exclaimed, I AM HERE TO GET MY LIBRARY CARD!

it was saturday afternoon. it was eight million degrees outside. there were no less than three festivals simultaneously occurring in a three block radius. my need for a library card was probably the least pressing of the library staff's concerns.

ultimately- after three trips up the escalator and two trips down- i wound up where one goes to get a library card. the circulation desk. where a lovely woman gave me a beautiful bright green piece of plastic and asked that i print my name on the front and sign the back.

my library card! i looked at it in love and wonder and then signed the wrong name.
by oline

Email ThisBlogThis!Share to TwitterShare to FacebookShare to Pinterest
filed under: reading in the city, the family forward