kantor's dating a vegan, so when we go out to Not On A Monday dinner, it is a festival of carniverousness.

because, for reasons unknown, barbecue appears to be the genre in which we can incoporate the most meats at a given time, we've begun a spring tour of chicago barbecue restaurants.

i use the word "tour" loosely. so far, the tour has made a mere two stops, but we have high, high hopes.

last night we classed it up and went to chicago q, which if you ever tried to envision what a barbecue restaurant in the gold coast would be like, is exactly what you'd expect. but, though the kobe beef brisket was stunning, i don't know that i'd send you there for the barbecue.

i would, however, totally send you there for the bowls of complimentary pickles, which were laced with vinegar and onions and sugar and awesome. and which kantor and i devoured several bowls of as though they were heaven on earth. 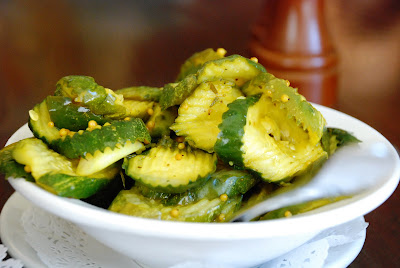 Ribs'n'Bibs is an obvious choice but maybe you haven't run across Smoque? It is really really good.

it's looking like ribs'n'bibs may be our next stop, given that i lived two blocks away and never went.