on 24 december 1997, i received the jackie and jfk plaster busts that "actually look[ed] real." really, they didn't, but i was young and naive and it was my first encounter with statuary and i was, accordingly, bewitched.

in great eaton family disasters, somewhere around 2001, jfk bust lept from the windowsill on which he sat in my bedroom and busted his head. like, shattered it all up in a way creepily in keeping with historical fact.

in recent years, i've lamented that we didn't keep him. because i am macabre and he was historically accurate and jackie looked terribly lonely and, though damaged, he was still part of a matched set. but i gave him up for gone, because who on earth hangs on to a shattered statue? much less for 10 years.

i randomly mentioned this to my father one day. in that off-handed way that one speaks fondly of the broken toys of one's childhood, as though there was a destiny of which they were deprived.

all you need to know about my family is that yesterday this came in the mail: 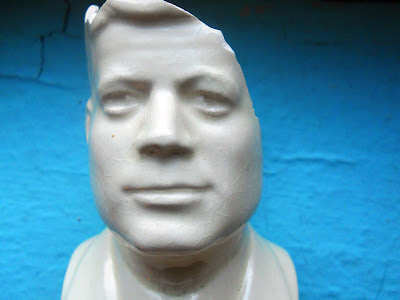 your parents are awesome.

you really love it, don't you?

i think there's a cover of something death cab for cutie that features the jfk head.