not six months before i moved back to chicago, croftie and dougo had a fall party. every mapher living in chicago then went to this party. and any time we saw any of those maphers for the next four years, they would mention two things: how wonderful that fall party was and how gorgeous croftie looked in her gold lame dress.

the dress was from the white elephant, a thrift store at the corner of halsted/fullerton/lincoln known for it's failure to adequately distinguish between dresses and nightgowns and the frequency with which it makes me ask the question: could i pull of $5 leather pants??? it was here, at the white elephant, that croftie purchased the gold lame dress that had people talking about that damn party for years.

i'm pretty sure this was the greatest party of all time and, as you can see, all these years later i'm still bitter. up to this point, the fact that sensei was in japan and, therefore, missed out as well has been my greatest consolation, but i think the $10 gold lame dress that the white elephant yielded up last weekend may finally heal my wounds.

which leaves this question: could i pull off $5 leather pants??? 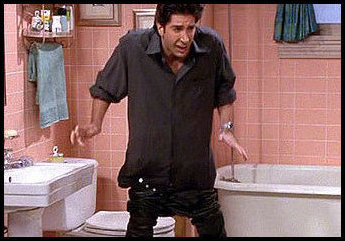 Email ThisBlogThis!Share to TwitterShare to FacebookShare to Pinterest
filed under: maphery, retro, sensei

I think we should dedicate Thursday to venting our disappointment over this. I also think it's no coincidence that you and I were the only MAPHers not in attendance and that we are also the only two Southerners among the contingent. Clearly they all wanted to talk about their collective adventures in the swamps of Indiana without us snorting and scoffing in the background.

Also, without the diacritic mark, "gold lame dress" is hilarious.

indeed. though our having actually started the legendary writing group they always said we should have and writing about it extensively in multiple venues seems like adequate revenge.

ah yes, i think i meant to go back and fix that then forgot. amazing the fine line between lame and lamé. excellent use of your diacritical knowhow as well.