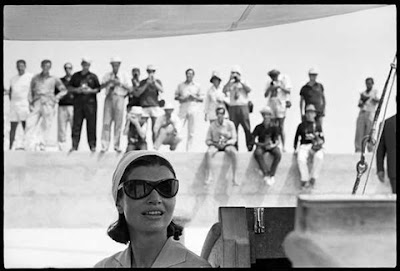 i'm at dinner with my uncle and cousin. i am trying to explain the sex toboggans. it is awkward.

my uncle mentions "jackie onassis." my cousin looks confused. he asks us to repeat this wackadoodle foreign name. my uncle tries to explain.

he uses a series of buzzwords. "unique style." "first lady." "french." he lists every single one of her last names. even bouvier.

most people miss the bouvier. i am proud of him for remembering.

i'm fascinated by the depth of his understanding and that he would launch his argument from the esoteric angle of the bouvier/auchincloss/kennedy economic/social dynamic.

this is a man whose jackie knowledge was once limited to the song by human sexual response. that he is now attempting to explain jacqueline onassis to an adolescent boy by expounding upon the psychological impact of her youthful wealth-by-proxy is fucking impressive.

and yet i'm tempted to leap in with an overwrought explanation- as though it were entirely obvious- when he does not immediately cite her's as the most significant female life of the twentieth century because, in its fictions, it covers every single aspect of the female experience.

realizing this would be lunacy, instead, i stick to economics. i turn her into a math problem and say she was important because she brought in $1 billion over the course of twenty years.

i say this and my cousin looks at me. he takes a bite and says through a mouthful of pizza: but she's dead, right? so do people really care?
by oline