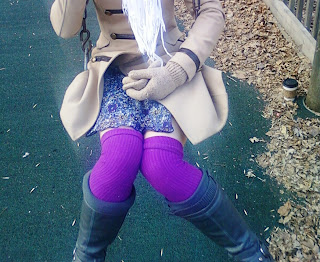 i've wanted to go swinging (as in, on a swing set- not sexually) since the second sunday in june- when the philosopher and i were blazing through cleveland's wonders and saw a set of swings incongruously placed in the middle of the avenue of international parks.
we didn't swing. instead we ate fuhl from a styrofoam container while sitting on a bench by a lake amid a flock of geese.
this was an experience awesome enough in its novelty that i was sufficiently distracted from the need to swing. i have, nonetheless, wanted to swing ever since.
in the spirit of making deferred dreams come true, on a random recent 15° weekday at noon, the philosopher and i invaded dorothy's playground at oz park to, at long last, swing.

and as much as i hope one day to be able to have a piano, i think i'd rather have a swing set instead.
by oline

Email ThisBlogThis!Share to TwitterShare to FacebookShare to Pinterest
filed under: adventure in the city, the philosopher