in college, i hung out with these 8 boys. it is the closest i've ever come to having brothers.

they kept me sober and i kept them alive.

that sounds like a sweeping generalization, but i count in its favor the fact that the only time they went to jail was when i was out of town.

it's funny to see these boys now. to meet their wives and sit in bars with them and watch their eyes grow wide with wonder when i order a drink. because i didn't drink then and there is this sense that we are all frozen in time in 2002. still where we were, still with the people we were dating. there is the sense that nothing has changed though, truly, everything has.

coltharp came to town last week. and as we sat with burgers between us, i realized something i had never noticed before: that our relationship was one of knowing glances.

in all those years we never really spoke to one another. odd considering that in that group of misfits, we were the most deviant in that our being there kind of made absolutely no sense.

he was a good catholic boy who read left behind and dated a girl with pink hair who was guaranteed to cry at some point during every party we ever threw. i was a good baptist girl who read a purpose driven life and dated a boy who had a mohawk and whose only stated priority, at the time, was being "hardcore."

i don't remember talking to coltharp then and we didn't really talk much now. we just ate our burgers and sipped our beers, and there was something tremendously comforting about that. that after all these years, we can look up and smile knowingly. and that some things are still the same. 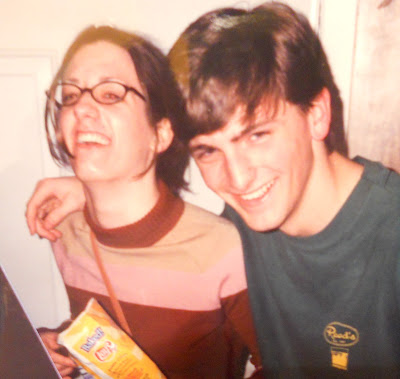 Email ThisBlogThis!Share to TwitterShare to FacebookShare to Pinterest
filed under: boys boys boys, retro, the marrieds

Somebody called me "hardcore" the other day and I just laughed about it. Later when I thought back on it, I had a something akin to a panic attack of shame. It's mortifying that people still remember it. I've seen "hardcore" and I am not impressed with its results.
I hope SColtharp is doing well. Is he married yet?

i'm glad you're appropriately ashamed of that, much as i'm shamed by the straight-legged jeans. scoot seemed to be doing well. not married. same as ever.