0 on being rhett butler 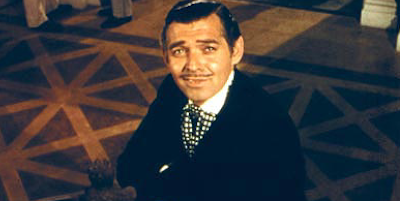 we are trying to write about the south, sensei and i. the dane says we must.

we are in the naked lady bar drinking tonic and tanqueray, talking about the south when the dane says that, as a lover of gone with the wind, i'm going to appreciate the story she's about to tell.

she commences to inform sensei and i of a sex practice wherein a couple has intercourse via a hole in a bedroom sheet.

this may be amish, asian, or victorian, but let me be abundantly clear: it has nothing to do with gone with the wind.

i can't remember where this came in the course of the conversation. it was before thomas kinkade. maybe right after sensei boasted that he is more vulgar with his other friends, thus inciting the dane and i to up our vulgarity for the remainder of the night.

this would've presumably led us to the notion that there is nothing less conducive to sexytimes than the sudden bursting forth of genitals through a holey sheet and it is through this discourse on how amish sheet sex has nothing to do with gone with the wind that we hit upon the fact that there is much in the life of rhett butler that is evocative of the experience of being southerners outside the south.

i've seen gone with the wind a thousand times. at least. and i don't know that i've ever fully considered the character of rhett butler. but suddenly, here he is.

rhett butler. the visitor from charleston. the perfect metaphor.

being a southerner outside the south, you are an outsider wherever you go. in the north, sensei and i identify as southern. in the south, we are deserters or, even worse, yankees.

we fancy vulgarity. we poke fun. we smirk and say things southerners should never ever say. and we did something no self-respecting southerner should ever do: we left.

and yet, one never really leaves the south. this haunted house has wheels. it is with us wherever we go. my favorite fact about rhett butler is that he joins the confederate army only after it is clear that the war is lost. there is something typically southern in such resignation.

sensei captures another aspect of this when he says, i look at the confederate flag and i think, "this reminds me of evil but it also reminds me of home."

this is a paradox in which the south always wins. because, for all the insoucience, the flaunting of rules, the dancing amongst the bones in this haunted house, we live here. and, in the end, when the war's nearly lost, we will be fighting like rhett butler for a dream in which we do not believe.
by oline

Email ThisBlogThis!Share to TwitterShare to FacebookShare to Pinterest
filed under: deep deep thoughts from the naked lady bar, going with the wind, southerners in the city