working in an office over the holidays is a bit like going to a family reunion and being forced to sit with the crazy great-aunts. suddenly everyone is way more enthusiastic than normal and everything is a much bigger deal than it has any right to be.

a huge box of cookies from miami air arrived in our office on thursday. because there's a bake-off scheduled for next tuesday and participation has been somewhat lacking, management subsequently released a statement saying that the miami air cookies were being held hostage until (a) more people signed up for the bake-off or (b) the bake-off itself occurs.

never mind that we have been given access to copious quantities of expensive food for the last month. that is irrelevant in the face of the fact that we are being denied these cookies now. a flurry of protests occurred all of thursday afternoon. and then, on friday morning, this sign appeared: 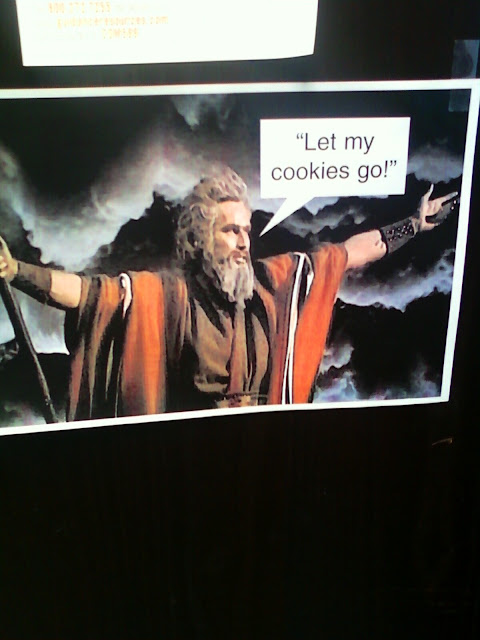 Email ThisBlogThis!Share to TwitterShare to FacebookShare to Pinterest
filed under: the office

you'll be happy to know they were freed yesterday afternoon.

This post caused me to start singing "pharoah, pharoah, Ohhhh baby let my people go." in my head. Yeahhhh- thanks for that.