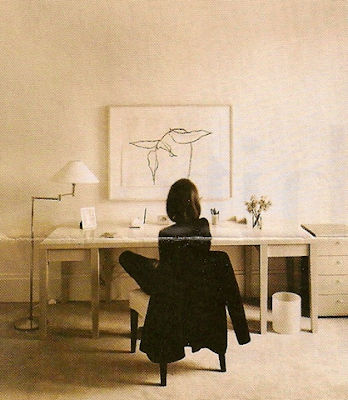 writing biography is like being blanche dubois. you've nothing except the kindness of strangers upon which to rely.

that's a whole heap of contingencies. particularly for a letter on which i forgot to include a return address.

i've written the sister before. seven years ago, i wrote her about this very thing. with my letter i included a list of 27 questions, most of them featuring separate bullet points. i pray she does not remember that. at this point, 10 seems a brazen liberty to take with someone's time.

the sister is endlessly fascinating. she inspires an admixture of slight pity and extreme awe.

i do not expect she will write back. but i've gotten rather accustomed to the receipt of famous mail and there's a part of me that's getting cocky, spoiled by the people who have written back, even if only to say they don't remember.

i want her to write back because she's The Sister and she may have biographically important things to say and blah blah blah.

but mostly, i want her to write back so i can have a piece of paper with that handwriting. the handwriting that is just a few genetic degrees removed from jackie's, which i know better than my own.
by oline

This is why I could never be a biographer. While writing about spiders, I have become obsessed with them. When I see a spider, I can't help but stare at it, watch it, observe it. I spend a disturbingly large amount of time trying to imagine what it's like to be one. So, if I tried to write about an actual person, I would absolutely become a stalker.

i'm not gonna lie. i feel like a horrible creep most of the time these days.

We've got to read that book by A.S. Byatt - The Biographer's Tale .