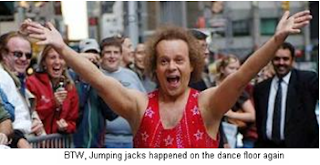 we are on the cusp of a dramatic cultural change, people. there are jumping jacks on the dance floor.

and not in an ironic, electric six fire in the disco, fire in the taco bell kind of way, but as in actual jumping jacks. on the dance floor. as popularized by richard simmons.

i was first witness to this phenomenon at halloween, when it was possible to dismiss it as a freak incident stemming from overconsumption at the open bar.

that's not to say it wasn't appalling to an extent that i blocked it out for a solid week and a half only to be reappalled when recalling it at a later date. but it was just one person. it wasn't an epidemic. until frankpank returned from this past weekend with the following highly scientific report: "BTW, Jumping Jacks happened on the dance floor again." at which point we are left to assume they will soon be widespread.

on the one hand, i worry this will open the door for other even less aesthetically pleasing aerobic moves on the dance floor. the grapevine, the around the world straddle and, God forbid, the double-knee.

but then again, i kind of have huge respect for richard simmons and i kind of love the idea of all these hipsters out there, drunk off pbr, sweatin' to the oldies. just like their grandmothers did.
by oline

Email ThisBlogThis!Share to TwitterShare to FacebookShare to Pinterest
filed under: so you think you can't dance