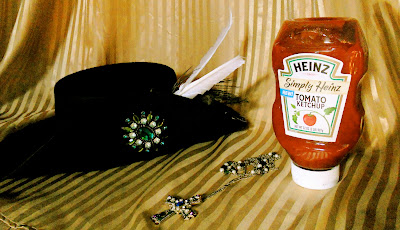 last month, when we were belatedly celebrating his birthday and fiending for fries, i told j.kant about The Ketchup.

j.kant did not believe. and because i had none with me, i couldn't make my point. thus, i vowed that come halloween, i would be bringing The Ketchup. because he really needed to know.

(The Ketchup Of Our Lives, people. go forth. get it. now.)

we're dancing on halloween when, just as we are about to say ay-oh, j.kant says something about how everything would be so much better if we had The Ketchup. he says this not in the dreamy way that the philospher did at that wedding when we ate that chicken that could've been so much better had we had The Ketchup, but sarcastically, sassily, skeptically.

this is how i remember what two and a half whiskey sours had almost made me forget. that i am a man with a mustache dancing in a ballroom with a 2 oz jar of ketchup in my right pocket.

et voilà! with a flourish, i brandish the bottle between us.

we are riding home in a cab at 2 a.m., me sandwiched between the double dares, the point of my saber snagging the driver's arm, when someone remembers The Ketchup and out it comes. it passes from j.kant to me to o.do as each of us gingerly pulls a dollop out on a pinkie.

i'm a tired, tipsy man and it is 2 a.m., but nothing makes me happier in all of halloween than the outright joy that fills the back of that taxi as we sail home, licking The Ketchup from our fingers, believers all.
by oline

Email ThisBlogThis!Share to TwitterShare to FacebookShare to Pinterest
filed under: The Ketchup Of Our Lives